There is little difference between the country’s ruling party and the opposition. 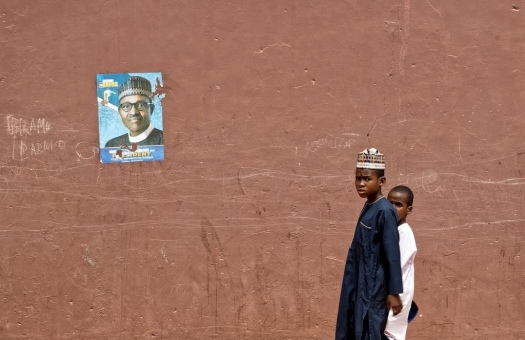 A campaign poster for President Muhammadu Buhari, who is running for re-election.

Nigeria has come a long way from 1999 when the army handed over power to a democratically elected government, but the bar must rise from simply conducting marginally free and fair elections and having scheduled transitions.

After being postponed for a week by the national electoral body for “logistics and operational problems,” national elections will be held in Nigeria on Saturday. President Muhammadu Buhari, 76, is vying for re-election as the candidate of the ruling All Progressives Congress.

Mr. Buhari, a former military dictator, refashioned himself as a reformed democrat and won the presidency in 2015 as the candidate of a grand opposition coalition. An insular and conservative politician, he has few personal friends or allies in politics or in the business community. But he has immense support among the impoverished masses across northern Nigeria, where he is perceived to be one of the least tainted politicians or former military officers.

His supporters saw his reputation as a ruthless former military dictator as an asset that would enable him to take on the political elite and end the grand banquets held at the expense of the Nigerian treasury. Mr. Buhari defeated President Goodluck Jonathan by promising to wipe out endemic corruption and defeat the Boko Haram extremists.

But Mr. Buhari hasn’t succeeded in ending corruption, improving the economy or defeating Boko Haram. He faces his main challenge from Atiku Abubakar, a business tycoon, who is the candidate for the opposition People’s Democratic Party. Mr. Abubakar, who served as vice president from 1999 to 2007, has tried several times to get either the ruling or the opposition parties to nominate him as their candidate for president.

A billboard for an opposition candidate, Atiku Abubakar.

The capricious workings of the Nigerian political space make it difficult to make distinctions among the contenders and their political entities. Neither the ruling party nor the opposition parties are rooted in any discernible political ideology.

Almost every prominent politician supporting the opposition candidate has at some point been a member of the governing party. Quite a few government ministers and prominent politicians publicly supporting President Buhari were until recently members of the opposition. Switching political parties not only is simple but also often needs no justification. Political alliances are highly fluid and can sometimes change mere weeks before elections.

In 2015 when Mr. Buhari took over as president, Nigeria had the third-largest number of extremely poor people; in 2018, Nigeria overtook India to become the country with the largest number of the extreme poor — a staggering 91 million living on less than $2 a day.

Unemployment rates have risen from a little over 10 percent in 2016 to 23 percent in 2018. The stasis of the presidency was strikingly illustrated by Mr. Buhari’s taking six months to appoint government ministers and spending months away in London for medical treatment. His reluctance to speak to the people or to react in a timely manner to scandals in his government did not inspire confidence. Babachir Lawal, a former top official in Mr. Buhari’s government, was only recently charged for a 2016 corruption scandal.

While not seen as personally corrupt, Mr. Buhari seems either powerless or unwilling to deal with corruption charges against some of his confidantes. In October, videos of Abdullahi Umar Ganduje, the governor of the Kano State, receiving wads of dollars from a government contractor — allegedly as kickbacks — were leaked and created a sensation in Nigeria. Mr. Buhari failed to make a clear statement, and a few weeks later, the president campaigned alongside the governor and endorsed his candidacy.

Another significant failure of Mr. Buhari has been improving the rule of law and civil liberties. In his administration, the police and the army have continued with, if not heightened, extrajudicial killings, arbitrary arrests, illegal detentions, executions and intimidation. Mr. Buhari has supported the army’s use of deadly force and used language promoting the heavy -handed violence of the state security forces, demonstrating that he is still very much a military dictator at heart.

It forces one to ask: Will the election change anything? In a rent-seeking system sustained by patronage, fueled by corruption and perpetuated often by force and disregard of the rule of law, moving the country toward a more functional democracy will require much more than elections.

It would be naïve to expect that a new president in the person of Mr. Abubakar will radically reform Nigeria. Mr. Abubakar has a tainted reputation, having been accused of amassing great wealth through corruption, his primary accuser being no less than his former boss, Olusegun Obasanjo, who was the Nigerian president from 1999 to 2007.

In 2005, Mr. Abubakar was involved in an F.B.I. investigation of Representative William Jefferson. According to the F.B.I., Mr. Abubakar had sought bribes from Mr. Jefferson to help him win business contracts in Nigeria for a technology company controlled by Mr. Jefferson. In 2010, a United States Senate report accused Mr. Abubakar and Jennifer Douglas, his fourth wife, of laundering over $40 million in suspicious funds into the United States between 2000 and 2008.

Mr. Obasanjo, the former president, described Mr. Abubakar as disloyal, incompetent and corrupt in several interviews and a book. In a shocking twist to the tale, Mr. Obasanjo is now backing Mr. Abubakar against Mr. Buhari.

Nigeria’s major business magnates have remained more or less the same regardless of the party in power. Nigerians will be dealing with similar political actors whether Mr. Buhari is re-elected or Mr. Abubakar replaces him.

Corruption in Nigeria is not going anywhere anytime soon. All of the major players have either been seen to condone or directly participate in it. Many allies, supporters and funders of both leading presidential candidates are people with histories of crime and corruption — people whose support comes at a price. The businessmen enjoying government favors and monopolies and the political contractors who serve whoever is in power will be around.

For many Nigerians, even educated middle-class ones, being connected to the apron strings of government is important. Often a person is one government appointment or contract away from stupendous wealth, as well as one event — a major illness of themselves or their dependents, a fire or natural disaster, an accident — away from poverty.

This state of dysfunction discourages people from organizing in nonpartisan unpaid movements that challenge government impropriety or demand accountability or justice. This fear and vulnerability is effectively weaponized by politicians, and elections become a mere formality, putting a new coat of paint on the walls of corruption, disregard for the rule of law and denial of human rights.

It might be a tall order to expect consistent active engagement from people trying to survive, who groan under the weight of a dysfunctional, largely unsafe country. But there is no substitute for continuously demanding accountability, not just during elections but throughout the tenure of whoever wins. Because democracy is a continuous process and not an event.

Elnathan John, a Nigerian novelist and satirist, is the author, most recently, of “Becoming Nigerian: A Guide.”