The rot in Nigeria’s educational system is costing the country hundreds of millions of dollars.

Keeping in trend with a long-standing preference for seeking education abroad, Nigeria was the only African country ranked among the top 25 origin countries for international students in the US over the past year.

The entire budgetary allocation for education in Nigeria for 2019 came in at $1.7 billion (620.5 billion naira), which critics pointed out was 15% to 20% below the minimum level recommended for developing countries by the United Nations Educational Scientific and Cultural Organisation (UNESCO).

The choice of seeking education in the US is largely driven by local problems. Perennial under-funding of education in Nigeria has resulted in significant decline in both the quality of teachers and infrastructure in schools. At the tertiary level, the problems are compounded by recurring strike actions by public university lecturers amid protests of low wages and benefits.

These problems have fueled a rise in expensive private universities which offer the promise of fixed calendars without strike action and better facilities as viable alternatives for middle and high-income families seeking higher standards. But there’s still a capacity problem as Nigeria’s university system, which holds over 150 schools, remains mostly over-populated. As such, only one in four Nigerians applying to university will get a spot. Between 2010 and 2015, only 26% of the 10 million applicants that sought entry into Nigerian tertiary institutions gained admission, according to Nigeria’s statistics agency.

The appeal of foreign universities also goes beyond the availability of better facilities as parents typically seek to unlock a higher level of opportunities for their children. It’s a sentiment that’s currently driving migration of middle-class Nigerians to Canada and Europe.

In cases where the students return home, their expensive, foreign degrees also provide an edge in Nigeria’s very competitive labor market. In comparison, about half of graduates from Nigerian universities annually are estimated to remain unemployed. 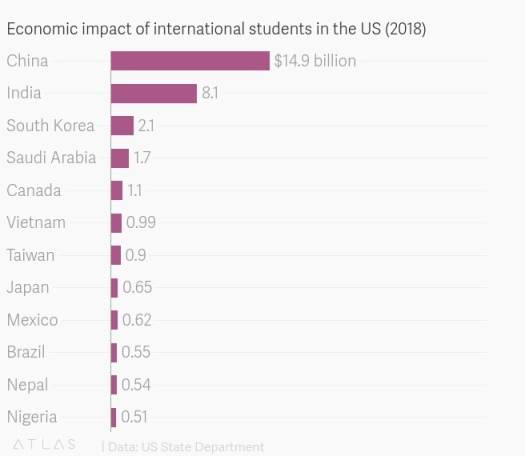