The poor in the North has no Uhuru expectation anytime soon. Their elites, rulers elected and spiritual have failed and continue to fail them. They are the least educated and live shorter lives.

In an effort by the Sokoto State government to cover up the fact it gave N700 million from Paris Club refund money to the Sultan of Sokoto, the Secretary to the State Government (SSG), Prof. Bashir Garba, published a purported 2016 bid to purchase a Guest House in Abuja for the Sultanate Council.

In an effort by the Sokoto State government to cover up the fact it gave N700 million from Paris Club refund money to the Sultan of Sokoto, the Secretary to the State Government (SSG), Prof. Bashir Garba, published a purported 2016 bid to purchase a Guest House in Abuja for the Sultanate Council.

In the memo, signed on November 24, 2016 and sent to Gov. Aminu Waziri Tambuwal for approval, the SSG wrote that the Sultanate Council expressed the need for a guest house in Abuja, “to defray the government of accommodation and ensure convenience of His Eminence and entourage while in Abuja for sundry official engagements.”

In the bid, three houses were listed as properties considered for purchase. The houses listed were Alawo Close, off Lake Chad (to which no house number was given), valued at N700million; Plot No 1355 Cadastral Zone, A05, Maitama District, N750million; and No 16, Ontario Crescent, Off Mississippi Street, Maitama, N650 million.

Saharareporters investigation shows that 16 Ontario Crescent, Maitama property that was purportedly chosen from the fake bid might be owned by the Sultan of Sokoto, Alhaji Sa’adu Abubakar, for whom it was purportedly being purchased.

Sources close to the Sultan told Saharareporters that the Sultan had lived in a mansion on Ontario street for upwards of 10 years and had always stayed there whenever he visited Abuja. The massive house, which is about the size of some embassies, is on an exclusive street which often has police checkpoints, and on which vehicles are not allowed to stop.

The Sokoto state government could not explain why, if true, it did not pay the funds directly to Fawad Nigeria Ltd, the company that purportedly won the bid to provide what it claimed was a befitting "office and Guest House" for the Sultan in Abuja. 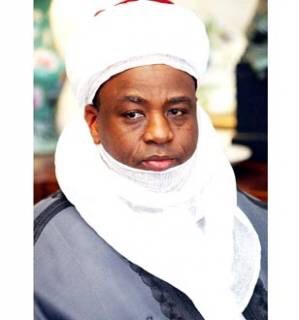 When Saharareporters contacted the Special Adviser to the Sokoto state government on Media, Imam Imam, he admitted that the Sultan was already living at 19 Ontario Crescent by claimed he was “renting” the property and that the new property was purchased from, Senator Abba Aji, a former adviser to late President Umaru Yar'adua

However, our source disputed the assertion saying the Sultan owned the property and other properties in the swanky neighborhood and that he also owns Fawad Nigeria Ltd the company that submitted the purported bid.

the new house purchased for the Sultan Sahara Reporters Media

Memo approving purchase of new house for the Sultan of Sokoto

For if you suffer your people to be ill-educated, and their manners to be corrupted from their infancy, and then punish them for those crimes to which their first education disposed them, what else is to be concluded from this, but that you first make thieves and then punish them. Sir Thomas More when asked about present day Nigeria and Africa at large.
The late basketball GOAT #Black Mamba RIP
General Trump declares himself as the sole administrator of the US as he acts without congressional oversight
Side clap at the impeached moron
The Moron has been impeached. Deris god o’ apologises to Patience Jonathan
The over egging of the Labour loss is akin to the analysis of the conservatives when they used the 2008 banking crisis to impose their ideological dogma to batter the poor and middle class to create a super rich class with the attendant political clot it enhanced for these people. This is giving a dog a bad name to hang it. Corbyn as a person may have been odious to certain class of people and a bad politician, the aim to reset the economy for the benefit of many is as valid as it was before Mrs Becket’s indulgence brought the candidature of Corbyn to the fore and after the second longest suicide  note in our political history. The attention of the people is equal to a light fly and like Trump and Boris learnt is not to give grand plans but tweet-like manifesto. John Smith was about to do same to Labour with his pre election budget before his death and survival of the Labour chances in 1998. The left must be shameless in offering little to broad strokes manifesto. People are only interested in headlines and moving on with other cyber activities. Remember John Prescott’s Labour promises on a business card.  
Strange and Trump bedfellows
Time people of the year
Labour’s shadow Home Secretary Diana Abbott wearing two left different shoes. This was not in the morning but in the afternoon with her medicated glass on. No wonder Labour was beaten like a drum.
My son’s first excise of his voting franchise. He voted for better funding for his school, transport to and from school, safe neighbourhood, environment and outward looking Britain. My son is the future and he has voted to protect it.
Trump and his crew who are riding coaches and horses through the American constitution
My dad going to get Thanksgiving Turkey
Omo, police don upgrade oOh, dis na d call center numba 112... There was a robbery in my neighbor's house and I called them... next thing I heard was . Welcome to Nigeria Police Emergency Center.. for English press. 1, for Igbo press 2, for Yoruba press 3. Then I pressed 1... then another voice came up....For car accident press 1, for armed robbery press 2, for boko haram please hang up.... Den I pressed 2, anoda voice came up.... If they're with knives press 1, pistols press 2, AK 47 press 3, machine guns press 4, bomb press 5, all of the above press 6... Then i checked and saw they were with all of them then I pressed 6... anoda voice came up sayin.... Hmmmm...! My brother, if ur brother dey police u go gree make im come?
It takes a thief
Ambrose Alli University Alumni UK