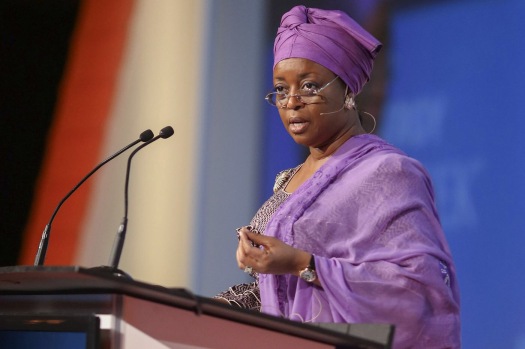 Nigeria’s anti-graft agency said it traced at least $615 million of allegedly illegally acquired cash and properties to the West Africa nation’s former oil minister, Diezani Alison-Madueke.
In addition to “boxes of gold, silver and diamond jewelry, worth several million pounds” found at her residence, the Economic and Financial Crimes Commission identified more than a dozen buildings across the country worth more than $500 million owned by the former minister, the agency said in a statement on its website on Wednesday.
On the strength of the evidence it has gathered, the EFCC said it will ask federal courts to order that the assets be forfeited to the government, according to the statement.
Alison-Madueke has previously denied any wrongdoing, and calls to her mobile phone for comment didn’t connect. Oscar Onwudiwe, a lawyer representing Alison-Madueke, didn’t answer four calls to his mobile phone or respond to a text message seeking comment.
Appointed by former Nigerian President Goodluck Jonathan in 2011, Alison-Madueke, an ex-president of the Organization of Petroleum Exporting Countries, served as national oil minister for five years until her party lost elections in 2015. She was arrested in London in the same year on suspicion of bribery and money laundering and later released on bail, a spokesman for the Nigerian government said at the time.

Property Forfeit
Justice Chuka Obiozor of the Federal High Court court in Lagos, Nigeria’s commercial capital, on Aug. 7 ordered Alison-Madueke to forfeit a $38 million property in the Banana Island district, one of the richest areas of the city, saying it was unlawfully acquired.
U.S. prosecutors are also seeking to recover $144 million of assets, including proceeds from the sale of a luxury condominium in Manhattan, New York, which they claim were bought with the proceeds of bribes paid for Nigerian oil contracts when Alison-Madueke was minister.

The U.S. Justice Department, in a suit filed in a Houston, Texas court, said bribes were paid between 2011 and 2015 to the former oil minister by two business associates, Kolawole Akanni Aluko and Olajide Omokore. The defendants acquired real estate in London that was used by the minister and her family, and bought her more than $1 million of furniture and artwork from several stores in Houston, according to the complaint.
Alison-Madueke was charged in a Nigerian court in April with violating anti-money laundering laws. She was described in the charge as being "at large."