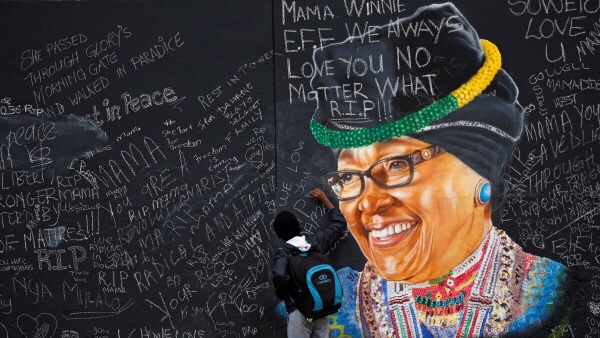 South Africa became a “non-racial” democracy in 1994, twenty-three years ago. Nelson Mandela, who has always firmly been identified with the African National Congress (ANC) and the end of apartheid, died five years ago in 2013. Winnie Mandela, his wife during his imprisonment and the transition to non-racial democracy (he was married three times), died this year. She was a radical activist in her own right and was for many in the liberation movement the “Mother of the Nation.” Shortly before her death, Cyril Ramaphosa became the ANC leader and then chief of state. His ascension to power came in the wake of the quasi-criminal ANC administration of President Jacob Zuma, which lasted from 2009 to 2018. Together, the juxtaposition of Ramaphosa’s pro-business presidency with the death of the Winnie Mandela and the prospect of national elections in 2019 are encouraging some opinion leaders and others on the left to question the Mandela legacy with a new vigor. Zuma’s corrupt administration has also contributed to the declining prestige of the ANC and, by extension, Mandela.

Since 1994, formal apartheid structures have been dismantled. The ANC government sponsored the construction of more than three million houses and put in place a safety net for the very poor. For the first decade or so, rates of economic growth were respectable, but over the past decade, the country has still not completely recovered from the worldwide recession of 2008-2009. For almost twenty years, economic growth fostered by government policy based on the “Washington consensus” of a free-market economy promised to be the tide that would lift all boats. Confidence in that system is waning, however, and can no longer be taken for granted. The persistence of black poverty highlights that there has been little fundamental social transformation, even if the material conditions of the black majority has improved. Access to education and health services among black South Africans remains poor, and, according to the 2013 South Africa Survey, blacks on average live sixteen years less than whites did in 2010. Most of the white minority live as pleasantly as they would in the developed world, while black South Africans, 80 percent of the country, live as they would elsewhere in Africa, with only a few exceptions. South Africa’s Gini coefficient—a measure of inequality—is by some accounts the worst in the world.

Almost from the beginning, critics accused Mandela of “selling out” to the whites in 1994, whereby the latter could retain their wealth and control of the economy in exchange for ceding political power to the black majority. Zimbabwe’s Robert Mugabe bitterly resented his replacement by Mandela as the African liberation icon and increasingly berated him over continued white privilege. Mugabe also supported financially Julius Malema and his Economic Freedom Fighters (EFF), who broke off from the ANC and called for a radical restructuring of South Africa’s economy and society, including expropriation without compensation of white property. Winnie Mandela’s death led to an outpouring of affection and nostalgia for a figure associated with black power and justice for the poor (and credibly accused of being a murderess), similar to Julius Malema and his EFF party. Nelson Mandela, on the other hand, is associated with democracy and racial reconciliation. In the wake of Winnie’s death, commentators on the left and advocates for black power are now openly challenging the compromise made by Nelson Mandela because of the persistence of gross inequality and poverty largely defined by race. As I argued last week, these critics tend to overestimate the strength of Nelson’s leverage at the time and overlook the role cronyism and corruption has since played in exacerbating racial disparities.