For nearly half a century after his stint as Nigeria’s military leader, Murtala Muhammed remained widely regarded as a dogged corruption fighter who took fearless steps against official graft.

As head of state, the army general dismissed more than 10, 000 public officials, charged many to court for malpractices, and moved against fraudulent firms.

Mr. Muhammed’s administration lasted six months before his assassination, but was long enough to convince many the 37-year-old was one leader who could have aggressively treated – if not cured – Nigeria of its chronic corruption, had he lived longer.

But to American diplomats, Mr. Muhammed was a strikingly different figure from the no-nonsense general many Nigerians respected.

They believed he was not only an arrogant mass murderer, but just as corrupt as those he went after.

And, although brilliant and daring, Mr. Muhammed was an erratic and impetuous ethnic chauvinist who lacked the unifying talent of his predecessor, Yakubu Gowon, American diplomats said at the time.

“The leader of the coup against General Yakubu Gowon is an erratic, vainglorious, impetuous, corrupt, vindictive, intelligent, articulate, daring Hausa,” a memorandum sent by then American Ambassador to Nigeria, John Reinhardt, to then United States Secretary of State, Henry Kissinger, on August 18, 1975, said.

The memo, amongst several recently declassified U.S. diplomatic cables, painted a sordid picture of a man regarded by many Nigerians as a folk hero of sort, for his seeming relentless war against corruption.

Mr. Reinhardt delivered the damning appraisal on the request of Mr. Kissinger shortly after Mr. Muhammed deposed Mr. Gowon in a coup d’état.

The change of guard apparently triggered a feverish effort by the American government to obtain the character portraits of the new coup leaders of Africa’s most populous nation.

“Brigadier Murtala Muhammed was a prime force in the Nigerian coup of July 1966, which brought Gowon to power, and is one of the two principal plotters against Gowon for the past two years,” Mr. Reinhardt wrote.

“He commanded a division during the Nigerian civil war, was involved in the only documented case of genocide, won one important battle, and thereafter coasted for upwards of two years until Gowon finally removed him from command and placed him in charge of Army signals, a position which he held until last month…coup.”

While Mr. Muhammed led Nigeria for less than a year before being overthrown, he featured for about a decade in the realms of military and political power.

He was also controversial. During the war against the secessionist Biafra Republic, Mr. Muhammed commanded the army’s second division which was accused of executing thousands of civilians in Asaba, Delta State, in what is now known as the Asaba Massacre.

The division was also accused of ordering the killing of several Biafran prisoners of war.

After he took office in 1975, Mr. Muhammed moved fiercely against corruption, earning praise.

But the U.S. cable depicted him differently.

One letter to Washington says Mr. Muhammed inherited from Mr. Gowon – and also contributed to – a “tradition of corrupt civilian and military officials, urban problems second only to those of Calcutta, drift and ineptitude in development, insoluble but containable ethnic problems, and a national temperament which combines pride, aggressiveness, arrogance and patriotism into a brand of xenophobia best labeled Nigerianism”.

“Almost six years after the civil war, Muhammed is probably ushering in a period of coups,” the cable said. “As a corrupt Hausa, he automatically attracts Ibo and Yoruba enmity, which he knows and has attempted to reduce by early appointments. As a Northerner and a Muslim, he will be expected to consolidate once and for all the leadership role which his fifty million brothers are certain is theirs. Muhammed will agree, of course, but will seem to the Hausas to vacillate as he sings ‘One Nigeria’.”

The Murtala Mohammed Foundation did not respond to a request for comment. Mr. Muhammed’s daughter, Aisha Muhammed-Oyebode, who heads the foundation, could not be reached. Calls and a text message to her phone were not answered.

Balaraba Ramat Yakubu, author and younger sister of the former head of state, said she was not in a position to respond. She advised we contact the foundation’s head office in Lagos. Calls to available numbers to the office did not go through.

Michael Ogbeidi, professor and head of department of History and Strategic Studies, University of Lagos, who has researched and written extensively on political leadership and corruption in Nigeria since 1960, said he rejected the American assessment.

“America should put its house in order first and stop acting as the most honest nation in the world,” Mr. Ogbeidi said.

He said Mr. Reinhardt spoke “un-ambassadorially”, and suggested the Americans may have been unhappy with Mr. Murtala because of his tough stance against “corrupt” American companies that violated Nigerian laws.

“I completely disagree with that assessment because no country houses corrupt business entities like the USA; and this is evidenced in the collapse of the country’s housing, mortgage and auto sectors,” he said.

Eric Teniola, a veteran journalist, who was the Oyo State Bureau Chief for the Nigerian Herald at the time, also disagreed with the Americans.

“I am unable to agree with the Americans that he was corrupt because although there were lots of allegations at the time, they were never proven,” Mr. Teniola said. As far as I am concerned, he was a brave and committed administrator, never afraid of taking tough decisions and then standing firmly by them. He was a straightforward man. He was never sly.

“But it is true that he has high temper and was not much of a team player. He also displayed indiscipline in the way he related with Gowon during the war.”

Mr. Reinhardt, who was the U.S. top diplomat to Nigeria from 1971 to 1975, said while there was no reason to believe that Mr. Murtala could approach Mr. Gowon’s success in accommodating ethnic rivalries, there was also no reason to think that he would be any more successful in rapidly developing the country.

“…And rapidity is the great need if he is to avoid Gowon’s political problems stemming from stymied development,” he said. “Money is obviously plentiful, but absorptive capacity is low (corruption, unrealistic planning, confused priorities, and a demonstrated reluctance to turn to the outside).”

The cable had fewer words about Mr. Obasanjo, who later succeeded Mr. Muhammed after his death, and would later become Nigeria’s civilian president. 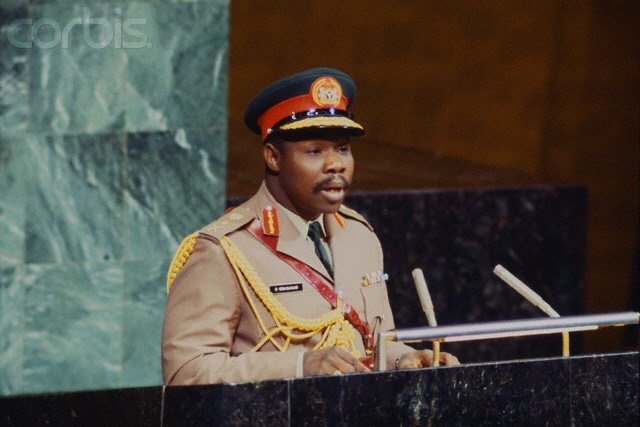 It pointed to the duo’s activism against apartheid in Southern Africa, and suspected they were anti-American.

“Finally, Muhammed and his co-plotter and now deputy, Brigadier Olusegun Obasanjo, are the most militant of Nigerian military leaders on the Southern African question. Gowon and his principal lieutenants burned with the rage of all Africans when considering this issue, but they were realistic,” he said.

“Muhammed and Obasanjo are advocates of a NATO-type military command within the OAU having the avowed objective of strengthening liberation movements. More responsibility may bring more realism. On the other hand, formidable ethnic and developmental problems could convince the new leadership that they should deal repressively with the domestic scene while joining militant Arabs and Africans in organizing a Pan African jihad for liberation. (A large Libyan delegation visited Lagos last week.) 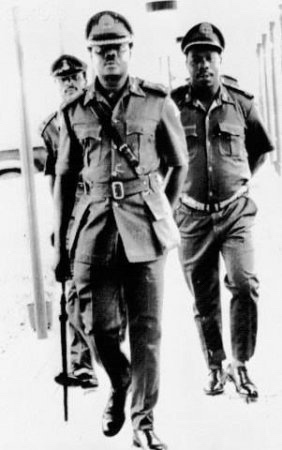 “Muhammed and Obasanjo are unlikely to bring any more inspiration to this enterprise than Nkrumah and Amin. At any rate they do not enhance their prospects for survival by any launchings on this uncharted course. Yorubas and Ibos, at least, will be disinclined to travel with them.”

Mr. Reinhardt said an early but “undocumented and probably inaccurate assessment” was that certainly Mr. Muhammed and perhaps Mr. Obasanjo were anti-American. He said that reaction was based on “an unfortunate U.S. visa restriction entered in Muhammed’s passport and Obasanjo’s impulsive move to evict our Embassy from prime Lagos property.”

“We are simply too far apart on the political issues which they exalt, mainly Southern Africa and the whole range of UN controversies,” he said.

He said the U.S. stood greater chance in the economic-commercial area, and noted that Mr. Muhammed had demonstrated some responsiveness in that regard.

“When the corrupt Muhammed succeeded the more corrupt J. S. Tarka as Commissioner of Communications, he immediately perceived that at least the telephones must operate properly if his fate were to be any different from Tarka’s.

“American businessmen, in extended conversations with me, described Muhammed as being un-Nigerian in his acceptance of their proposals. Specifically GTE and ITT were close to multi-million dollar contracts when Muhammed turned from communications to plotting.”

He assessed that Mr. Muhammed was intelligent enough to realise that he could not survive unless he converted oil revenues into tangible development.

“Among his considerable faults is not Idi Arminian stupidity,” he wrote. “His questionable maneuverings as Commissioner reveal a respect for American technology and a realization that capital markets do not begin and end in London. (British and Canadian communications interests have absorbed Nigerian revenues for years without producing a workable system. Other fields point up similar examples, as USG (Unites States Government) policy has deferred to a British sphere of influence.)

Amongst the recommendations Mr. Reinhardt sent to Washington, was an advice that the U.S. avoid even semblance of close political ties to the new regime, “until and unless it proves more durable than now seems likely”.

On the contrary, he advised the American government to maintain discreet and friendly state ties with Mr. Gowon, though avoiding commitments.

“After another coup or two, probably bloody, Gowon may seem more and more to be the indispensable military leader, or at least the only acceptable one,” he concluded.

Mr. Reinhardt was the first black U.S. ambassador to Nigeria. In 1977, he became the first career diplomat to lead the U.S. Information Agency.