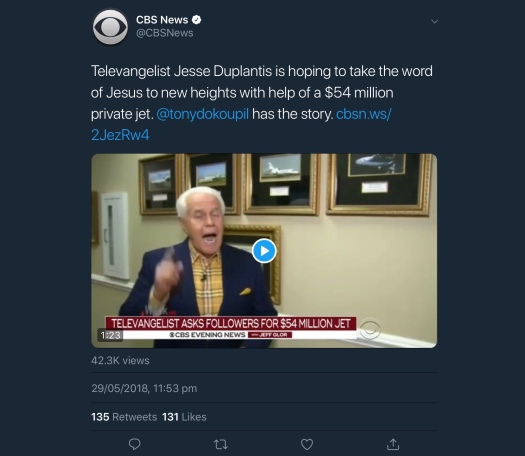 A prosperity gospel televangelist who already owned three private planes said God told him he needs a Falcon 7X, and he’s holding out for his supporters to give him the $54 million necessary to add a fourth jet to his fleet.

Jesse Duplantis is based in Destrehen, Louisiana. In a video posted online last week, CBS News reports, Duplantis urged his followers to “pray about becoming a partner,” saying that if he had the three-engine jet, he could fly “anywhere in the world in one stop,” easily spreading his message. “I really believe that if the Lord Jesus Christ was physically on the Earth today, he wouldn’t be riding a donkey,” he said. “He’d be in an airplane flying all over the world.”

Most believers in the prosperity gospel say that God rewards those who have faith and rain financial blessings on their church. CBS News could not reach Duplantis, so it’s unclear how close the televangelist is to buying his fourth modern-day equivalent of a biblical donkey.