CAPE TOWN — The Boston consulting firm Bain and Company, which usually gets top dollar for its meticulously researched advice, charged $11 million on a contract in 2015 to advise South Africa’s tax agency on an ambitious restructuring plan.

Now, the firm has acknowledged that its work on a “diagnostic report” on the agency was shoddy. It did not meet with senior officials involved in the tax agency’s modernization. It was ignorant of basic facts about the institution. And it did not even ask why the agency needed restructuring in the first place.

Bain admitted interviewing just 33 of the agency’s employees — including one senior official for less than 15 minutes. All had been chosen by the agency’s leader, a compromised ally of Jacob Zuma, then the president, raising questions of undue influence.

In an even more embarrassing turn, Bain admitted that it might have been a pawn in local political wrangling designed to help Mr. Zuma avoid scrutiny into his own taxes. The tax agency was among many government organizations gutted by corruption during his presidency. Before Mr. Zuma’s intervention, the national tax office had been an extraordinary triumph and was considered critical to collecting money the government needed to function at its most basic level.

“You can see how we might have been used,” Vittorio Massone, a managing partner at Bain South Africa, said, adding that the firm’s intention had been to improve South Africa’s tax agency, “not to destroy it.”

“Our business relies on success stories,” Mr. Massone said. “For us, this is already a massive failure.”

Bain stands accused of facilitating improper conduct by allies of Mr. Zuma. In part because of the firm’s consulting work, critics say, South Africa’s tax agency, once respected internationally for its rapid advances since apartheid, lost hundreds of key employees and became an enfeebled institution, unable to pursue tax dodgers. In turn, the public has lost faith in an agency that now faces crippling tax shortfalls — more than $6 billion in the past two years alone.

This has spurred the government to raise the value-added tax on products for the first time since apartheid ended — a move expected to disproportionately hurt poor people, the traditional support base of the African National Congress.

The revelations came last week as part of a government inquiry into corruption at the tax agency under the administration of Mr. Zuma, who resigned as president in February. Attempting to make good on promises to tackle endemic corruption in the governing A.N.C., Mr. Zuma’s successor, Cyril Ramaphosa, has also commissioned a wide-ranging inquiry into “state capture” — a form of corruption in which private businesses manipulate official policy to their advantage.

The state capture inquiry, which is expected to last years, will allow South Africa to learn from the mistakes of the Zuma era, supporters say. But critics say the investigation, like many others in South Africa’s post-apartheid history, is simply an A.N.C. distraction before national elections next year.

Whatever the government’s motives, the testimony from Bain officials provided an unusual look at corruption in South Africa in recent years and the role played by globally prestigious companies like Bain, KPMG and McKinsey.

In 2015, for example, the consulting firm KPMG produced a report repeating claims, later found to be false, that criminal investigators at the tax agency had been illegally operating a “rogue unit.” These claims were used to justify purges of senior staff members. Gartner, another American consulting firm, received an $11 million contract to review the tax agency’s information systems.

“There is a whole set of conflicts of interest and unhealthy relationships between governments and companies willing to rubber stamp them,” said Alex Cobham, chief executive of the Tax Justice Network, a British organization.

Facing withering criticism of their conduct in South Africa, some consulting firms have offered to return their multimillion-dollar fees. But Bain indicated on Sunday that it had no plans to do so. 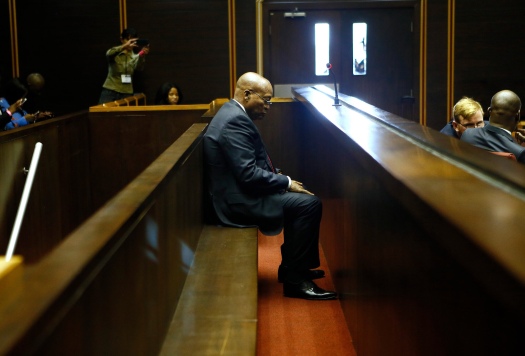 The tax agency was gutted during the administration of former President Jacob Zuma.Pool photo by Phil Magakoe

Testifying at the government inquiry on Thursday, Mr. Massone acknowledged that Bain “might have been used” by the tax agency’s leader, Tom Moyane, a longtime Zuma ally who was embroiled in a fierce political fight to seize control of the agency and purge veteran civil servants.

But critics say that Bain was a willing participant, handing Mr. Moyane the recommendations, and political cover, that he needed.

“At the very least, Bain seems guilty of seeing a cash cow, milking it for all it was worth and charging an enormous sum of money,” said David Lewis, the executive director of Corruption Watch, a nonprofit organization based in Johannesburg. “At worst, they knew exactly what they were doing and what they had to produce.”

Marlynie Moodly, a spokeswoman for Bain, rejected accusations of complicity but acknowledged that “in hindsight, there were warning signs that we should have flagged earlier and escalated accordingly.”

“In our eagerness, we were blind to the potential of individual agendas that may have been at play,” she added in an email.

Sunita Manik, the former head of the business center, said in a phone interview that Bain’s recommendations had a devastating effect on the tax agency.

“When you nurture something and you build something, it makes you heartsore to see it broken,” said Ms. Manik, who worked at the tax agency for 23 years.

Mr. Ramaphosa’s pledge to root out corruption has been complicated by factional splits in his party, and he depends on tainted senior officials for political support. Yet, with national elections looming next year, it is critical that the president be seen as taking action to fight mismanagement: The A.N.C. has been hemorrhaging votes in recent years, a decline analysts attribute to the governing elite’s brazen self-enrichment.

Perhaps nowhere have the effects been felt more keenly than at the tax agency, which just a few years ago was praised by the International Monetary Fund and the Internal Revenue Service.

That abruptly changed in 2014, when Mr. Zuma replaced the national tax commissioner with Mr. Moyane, allegedly to protect himself and his allies from scrutiny. Mr. Moyane — who had no experience in tax affairs and was previously in charge of the nation’s prisons — immediately began a purge of the agency, disbanding key units and precipitating the departure of more than 1,000 technical workers.

Mr. Massone suggested in his testimony last week that Bain had started a relationship with Mr. Moyane even before he joined the tax agency. In 2013, while he oversaw the prisons, Mr. Moyane approached Bain for free advice, Mr. Massone said, adding, “His ambition was to become the commissioner.”

Bain later won the contract to provide a report on restructuring the tax agency, bidding less than $250,000 — a discount of 50 percent that the firm said was designed to cultivate more business in South Africa. Without starting a new tender process, the tax agency offered Bain a contract to begin the plan.

The fee ballooned to more than $11 million — an agreement that a leader in the inquiry described as “highly irregular.”

In May, Mr. Ramaphosa suspended Mr. Moyane, who is now facing a disciplinary hearing. He has threatened to fight his dismissal in court, and could not be reached for comment.