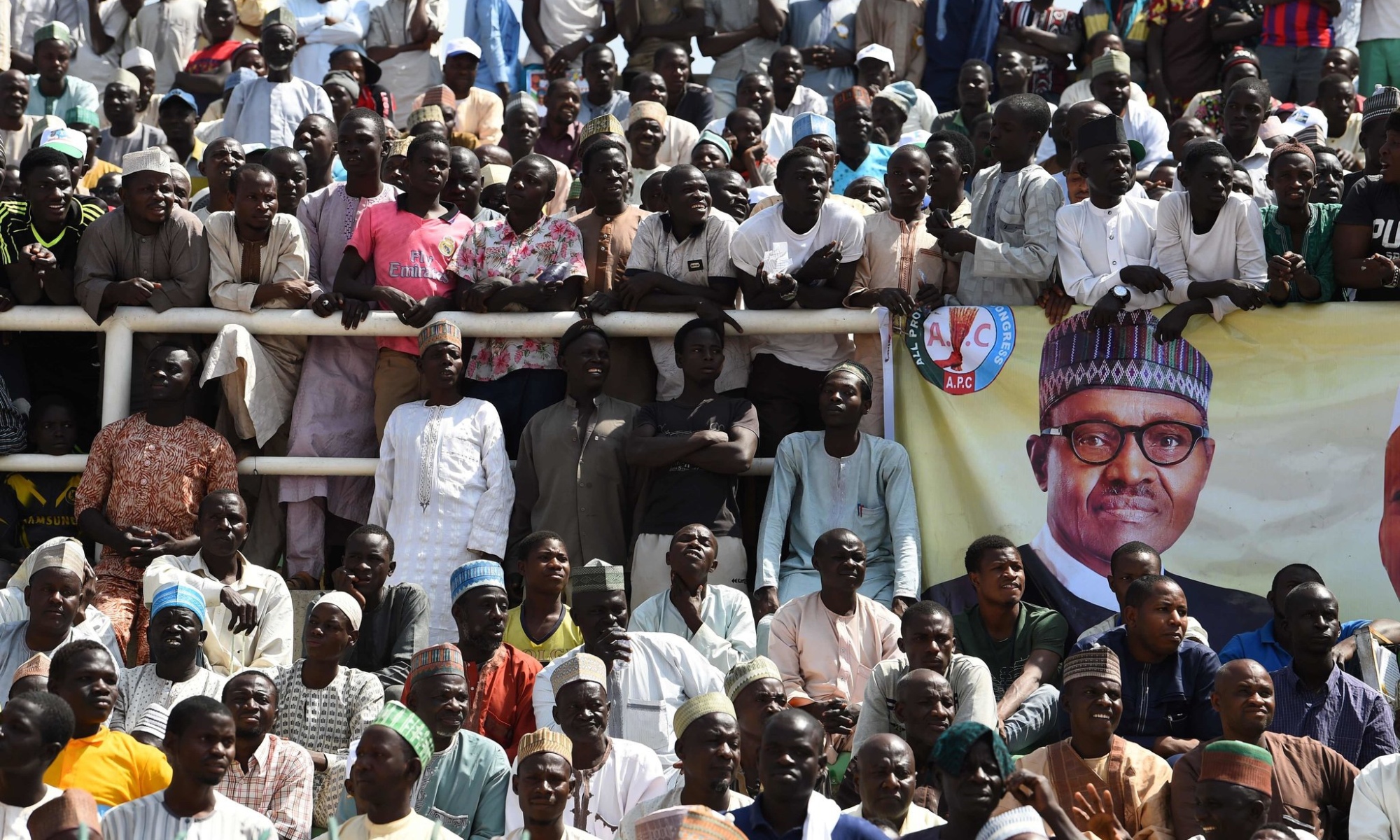 Supporters of President Mohammadu Buhari of Nigera at a rally in Kano last month. Mr. Buhari first took power after a military coup in 1983, and won election in 2015.

Supporters of President Mohammadu Buhari of Nigera at a rally in Kano last month. Mr. Buhari first took power after a military coup in 1983, and won election in 2015.

ABUJA, Nigeria — Muhammadu Buhari won the presidency in a historic election in Nigeria four years ago by promising to crush two scourges that had plagued the nation for years: endemic corruption and a war with Islamist extremists.

Back then, Mr. Buhari, a former military general, rode a wave of voter desire to impose greater accountability on the government, end a brutal war with the extremist group Boko Haram and bring back the hundreds of female students taken as captives.

Now, as Mr. Buhari is in the final throes of a bruising re-election campaign, he stands accused of falling short on all fronts.

Critics say Mr. Buhari has used his antigraft mantra to crush adversaries. Boko Haram is gaining ground, launching sophisticated attacks on weary, underequipped soldiers. And many of the captive students are still missing.

Out of 60 contenders, Mr. Buhari’s leading opponent is Atiku Abubakar, a candidate with little military experience and a past so checkered with corruption allegations that the United States refused for years to grant him a visa.

As voters prepare to go to the polls this weekend for what appears to be a tight election in Africa’s most populous country, the electorate has increasingly lost hope that the government will ever be free of graft. Instead, voters are fixated on mounting violence in pockets of the nation and everyday issues like having reliable electricity.

“Corruption was there before and it continues. But what of security? What of employment? And food?” said Debbie Okochi, who on a recent afternoon was selling electronics at a market in Lagos, where the streets were lined with cardboard cutouts of candidates. “Everything has become worse.”

Atiku Abubakar, the main Nigerian opposition candidate, at a campaign rally in the state of Kaduna.

Atiku Abubakar, the main Nigerian opposition candidate, at a campaign rally in the state of Kaduna.

Both leading candidates are slinging accusations at one another while traveling the country for last-minute rallies. The European Union is sending observers.

In a long communiqué released last weekend, President Buhari suggested that corruption and vote-buying were infecting the election process.

He said the fight against graft will take time, quoting an old proverb: “Only the patient one can milk a lion.”

Mr. Buhari, 76, a former military strongman, first took power in Nigeria in 1983 after a military coup. He launched a war on corruption by jailing political actors without trial and committing widespread human rights abuses.

For his political comeback, he assured voters he was a reformed democratic leader. He entered the presidency in 2015 buoyed by the fact that his victory marked the nation’s first peaceful passing of power from one party to another.

Corrupt officials braced for what was known then as “the Buhari effect,” a wide-scale crackdown on graft. A former defense minister was so worried he fled the country.

A protest in Abuja over Mr. Buhari’s suspension of the nation’s chief justice, who was accused of holding unexplained millions in undeclared bank accounts, a violation of an ethics code.

A protest in Abuja over Mr. Buhari’s suspension of the nation’s chief justice, who was accused of holding unexplained millions in undeclared bank accounts, a violation of an ethics code.

But Mr. Buhari has backed off some prosecutions in exchange for political support and overlooked some wrongdoing. It was only after pressure mounted on his policy during the campaign season that officials brought charges against one of his top appointees for stealing money intended for Boko Haram victims, a case uncovered in 2017.

Among Mr. Buhari’s critics, Senator Shehu Sani, a member of Mr. Buhari’s party, said that “the presidency uses insecticides” to fight corruption among those outside his circle, but only “deodorant” on his allies.

Last week, Mr. Buhari suspended the nation’s chief justice, claiming he was holding millions in undeclared bank accounts, in violation of an ethics code. The removal from office of a judge who would rule on any issues were the election contested was so swift that it prompted statements of concern from the United States, Britain, the European Union and others.

Mr. Abubakar jumped on the issue, calling the act “dictatorial” and “antidemocratic.” In an ominous sign, the governor of Kaduna proclaimed afterward that any foreign actor who intervened in Nigeria’s affairs would return home “in body bags.”

Mr. Buhari’s campaign has rejected accusations that any of his moves against corruption, including his suspension of the justice, have political undertones.

Mr. Abubakar, 72, a former vice president, has been notably quiet on the issue of fighting graft, even downplaying the need to clean up the government. His opponents say that’s because of corruption allegations against him.

A United States Senate subcommittee in 2010 held up Mr. Abubakar as a prime example of overseas corruption for funneling tens of millions of dollars’ worth of Nigerian oil revenues into foreign shell accounts. The dealings of Mr. Abubakar and one of his wives were contained in a report, “Keeping Foreign Corruption Out of the United States,” to show that tougher laws were needed to keep foreign officials from using American banks to bring suspect money into the country.

Herders outside the town of Garin Galadima, Nigeria.

Herders outside the town of Garin Galadima, Nigeria.

He was also a key figure in the 2009 bribery trial of an American congressman. Prosecutors said Mr. Abubakar, then Nigeria’s vice president, was the intended recipient of a freezer full of cash that former Representative William Jefferson believed would help secure telecommunications contracts to benefit his family.

Boladele Adekoya, an adviser to Mr. Abubakar, called any corruption allegations baseless and pointed out that Mr. Abubakar has never been charged with a graft-related crime.

When Mr. Abubakar made a bid for the presidency in 2007, election officials purposefully left his name off the ballot because he was facing a corruption investigation. He challenged the decision, restoring his name but taking third place in the vote. He rejected the election as not credible.

Last month, Mr. Abubakar was granted a visa to travel to Washington, where he hobnobbed on Capitol Hill. His press team blasted photos of the trip on social media, apparently a signal to voters that he had been absolved by the Americans.

Mr. Abubakar’s campaign has sought to shift the national conversation away from corruption and onto the economy. The tactic has targeted voters who seem to have given up that anyone will ever beat back graft.

“They now believe the country is so corrupt that it is nearly impossible to really conquer it,” said Alwan Hassan, the national field director for the All Progressives Youth Forum, which supports Mr. Buhari.

Meanwhile, outside the country’s most populous cities, security has become a major worry and will likely affect whether tens of thousands of people are able to cast votes.

Members of the Nigerian military carrying the coffins of five people who died in a helicopter crash during an ambush by Boko Haram militants.

Members of the Nigerian military carrying the coffins of five people who died in a helicopter crash during an ambush by Boko Haram militants.

Conflicts have flared between livestock herders and farmers competing for land. Gangs have launched attacks from enclaves in vast forests. Separatists in the south have resisted heavy-handed responses from the military.

But nowhere is the situation more grave than in the nation’s northeast, where Boko Haram and a splinter group loyal to the Islamic State have ramped up attacks, despite Mr. Buhari’s claim that he defeated the group.

The extremists have carried out more complicated missions against military installations and posted online a gruesome video of an attack on soldiers.

Multiple attacks on the city of Rann have emptied it, sending 30,000 people fleeing for their lives. Thousands have run across the border into Cameroon, according to Doctors Without Borders, where they have no water, shelter or food. The United Nations estimates a total of 60,000 people have been displaced since November.

In Maiduguri, hundreds of displaced people protested last week, blocking roads and tearing down campaign signs, saying they didn’t have enough to eat.

During testimony before the United States Congress last week, Gen. Thomas D. Waldhauser, the leader of United States Africa Command, said that Boko Haram and its factions had grown to as many as 5,000 fighters and “taken large pieces of real estate.”

Separately, about 100 students from the village of Chibok are still being held captive by Boko Haram. Mr. Buhari had promised to bring them back but has barely mentioned them on the campaign trail.

Yomi Akinola, who drives a taxi in Lagos, said that the campaign season usually brings an air of excitement and optimism. But he had little faith in either leading candidate.