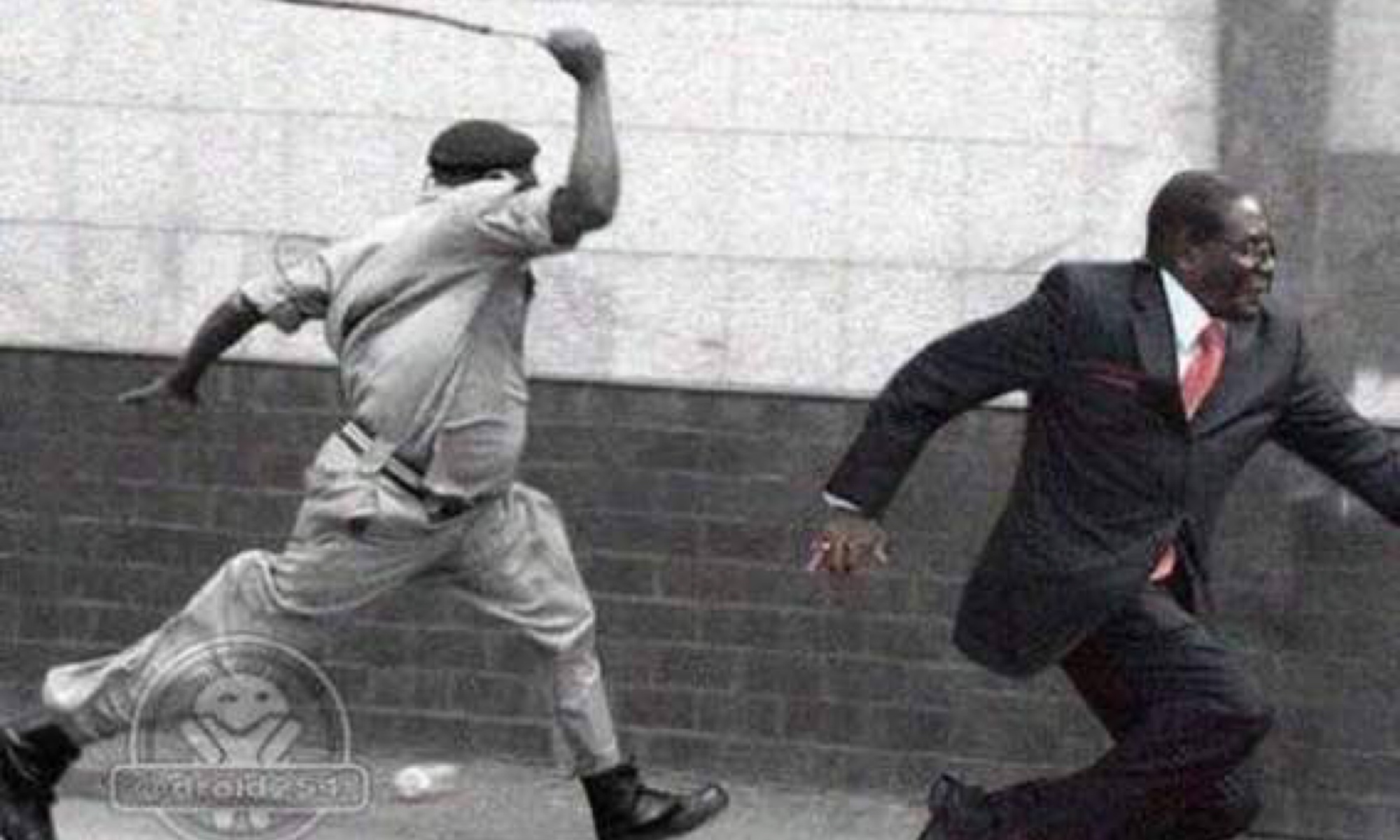 Its Rulers Care More About Power Plays Than Economic Reforms

Over the course of his nearly 40 years in power, former Zimbabwean President Robert Mugabe demonstrated again and again how disconnected his rule was from the needs of his people. The violent pogroms he ordered in the 1980s against a largely imaginary enemy in the west of the country and the land nationalization program of the first decade of this century he carried out without any economic plan to ensure continued productivity are cases in point.

Mugabe was ousted in a coup in 2017, and since then, many Zimbabweans have hoped for a change of course, including economic reform. Soon after taking office, Emmerson Mnangagwa, Mugabe’s successor, proclaimed the country “open for business.” But his rhetoric has not translated to action, and the new president seems no less disconnected than Mugabe did from his nation’s woes. Just last month, Mnangagwa announced one day that the government would more than double gasoline prices and flew off on a European tour the next. Given the country’s currency shortages and other economic difficulties, the price increase was sure to cause hardship to ordinary Zimbabweans, but the president seemed oblivious.

For Zimbabweans, the new tax was a last straw. The increased cost of transportation would make looking for work, and even food, far more difficult. Riots erupted, particularly in the poorer outlying suburbs of Harare that depend on commuter buses for transport into the city. The protests turned violent, and the state security services responded with shocking force, shooting protesters, beating hundreds near to death, and raping women. The violence became so intense that Mnangagwa had to cut his European tour short, canceling a speech at the World Economic Forum at Davos to return home.

The military crackdown on protesters took place on the watch of the country’s vice president, Constantino Chiwenga, who was acting as president during Mnangagwa’s absence. And the turmoil that has followed stems from divisions within the ruling Zimbabwe African National Union–Patriotic Front (ZANU-PF) party, particularly between those around Mnangagwa and those aroundChiwenga, a retired general and the country’s former defense minister. For now, the president and vice president work uneasily together. But the two men—one preaching openness, the other with a reputation for violent ruthlessness—have come to embody contrasting views of the future, both for their party and for Zimbabwe. While Mnangagwa propagates a mantra of Zimbabwe’s being open for business, Chiwenga’s preoccupation is security and control of political discourse. For him, economic stability means stability within the public sector and conditions of employment there. He has no sympathy for protests against poor conditions and pay. And much as Mugabe’s government did in the last years of its rule, the leaders of today’s ruling party have their minds far more on power plays than on sound economic policy.

A DIVIDED GOVERNMENT, A BROKEN ECONOMY

The crackdown was so brutal that even some senior police officers expressed horror at the actions of men in army uniforms. Immediately upon his forced return, Mnangagwa announced that the security personnel guilty of the worst excesses would be punished. But the incident was not the new government’s first use of violence against protesters, and the fact that Chiwenga was the one to deploy the security services in this instance has exposed the administration’s internal tensions.

Immediately following Zimbabwe’s last election, in August 2018, supporters of the opposition party massed to protest delays in announcing the results. The military responded with gunfire that killed six. Zimbabwe analysts such as Ibbo Mandazabelieve that Chiwenga was the official behind the military response then. Now rumors are circulating in Harare—both in ZANU-PF party circles and among the general public—that the vice president ordered the recent crackdown in order to goad Mnangagwa into moving against him, thus giving Chiwenga an excuse to depose the president by force. The response of Mnangagwa seems to have been to wait until Chiwenga was out of the country, receiving treatment in India for an undisclosed illness, before retiring four senior generals with close links to Chiwenga and his approach to security by violent enforcement.

The sad truth is that no one in Zimbabwe’s government has an economic plan to secure the country’s future.

The ZANU-PF is an oligarchic party that seeks to stay in power so that its elite leaders can retain their privileges. But the party’s shared interest in maintaining power does not prevent its leaders from engaging in power struggles. After all, very little ultimately threatens the party’s monopoly. Nelson Chamisa, the candidate of Zimbabwe’s main opposition party, the Movement for Democratic Change (MDC), almost forced a runoff in last year’s presidential election—but Chamisa is more popular than his party, which was heavily defeated in the parliamentary polls. Like the ZANU-PF, the MDC has a reputation for politicized corruption; but unlike the ZANU-PF, Chamisa’s party is not in power and therefore not constrained by the need to ensure that one of its constituencies actually benefits from its actions.

But the need to placate key constituencies ignores the need to uplift the nation as a whole. The sad truth is that no one in Zimbabwe’s government has an economic plan to secure the country’s future. Mnangagwa has worked futilely to coax investment into Zimbabwe, but the country is so heavily indebted, and its political situation so unstable, that major investors are unwilling to play ball. On his European tour, Mnangagwa sought investment from countries such as Ukraine that lack the capacity to relieve Zimbabwe’s enormous shortage of capital. The president can rely only on small, short-term, speculative investments for the foreseeable future. He may be able to secure some funds for specific infrastructure projects but will not be able to stabilize the country’s budget or import subsidized fuel. (South Africa reportedly refused to export fuel to Zimbabwe at subsidized rates in December, leading to the price hikes in January.) For 20 years, Zimbabwe financed itself by borrowing. Now no one will lend the country more money—not even China, which has invested heavily elsewhere in Africa. Mnangagwa had hoped investment would stave off the day when serious engagement with the International Monetary Fund becomes inevitable. The IMF wants Zimbabwe to meet its debt obligations under what is called the Lima process, a repayment schedule of loans already outstanding whose targets have not been met and would in any case require the country to adopt painful austerity measures.

Mnangagwa may have inherited many of Zimbabwe’s economic problems, but his government has still managed to create some that are new and were likely avoidable. In a country with a hugely diminished formal economic sector, there had remained some vibrancy in the informal sector, which now provides income to the majority of the urban and peri-urban population. Mnangagwa’s minister of finance, Mthuli Ncube, tried to broaden the country’s tax base in late 2018 by imposing a tax on cell phone financial transactions. But because the Zimbabwean economy lacked bank notes bearing real value (such as U.S. dollars, the main currency used nationally), and because the bond notes printed by the government failed to instill trust or acquire value in the minds of the public, virtual transactions conducted by cell phone monetary transfers became popular in the street markets of the main cities. In the absence of sufficient hard currency, people hoped that virtual transactions would be recognized by the banks as bearing the same value as those made in hard currency. These were sustaining the entire informal economic sector, upon which the majority of Zimbabweans depend. In one stroke, Ncube destroyed confidence in the virtual economic sector by imposing his tax on cell phone transactions. The fuel price hikes were a similar exercise in incompetence. When an item is in short supply, the textbook response is to dampen demand by raising prices. But raising the price of fuel grinds entire commercial and industrial sectors to a halt.

Ncube’s national budget reveals how desperate Zimbabwe’s situation really is, in that it allocates hardly any funds for investment and stimulus. Nor are there funds for import subsidies, not even of essential products. The budget seeks to alleviate a particularly pointless tax on sanitary products, but this is at a time when women in many parts of the country can no longer access sanitary products at all. It is a real crisis, particularly in rural areas, where women, including young women in school, can no longer find sanitary products and miss education when having their periods. Such imported items are in short supply because the country has ever scarcer funds available to meet its imports bill, which is far greater than its exports revenue. Under Mugabe, Zimbabwe became a country of borrowing, of acquisition, of accumulation. It ceased to be a country of production, capital investment, and circulation and shows no sign of changing course. The oligarchy around Mugabe, and now around Mnangagwa and Chiwenga, purchases beautiful mansions and acquires farmland for ostentatious display but, in the case of the farms, seems disinclined to invest in productive capacity, in machines, in infrastructure, and in all the ingredients required for a successful agriculture industry. The sense seems to be that more money can always be stolen rather than generated by economic productivity.

Where does the state of Zimbabwe’s government and economy leave the abject protesters? General Chiwenga will likely not be ordered to behave more carefully. Some of his close allies in the military may have been retired over the last week, but his influence in the army runs deep and he has a considerable following in the party at large. But his heavy-handedness is far from helpful. He once dealt with striking nurses by firing them all—in a country that needs medical capacity. Time and again, Mnangagwa has had to come to the rescue in crises his vice president has caused. Protests continue to flare as the country goes downhill, and the state security services will likely crack down on them again, leaving Mnangagwa to repeat his rescue act of smoothing over the situation.