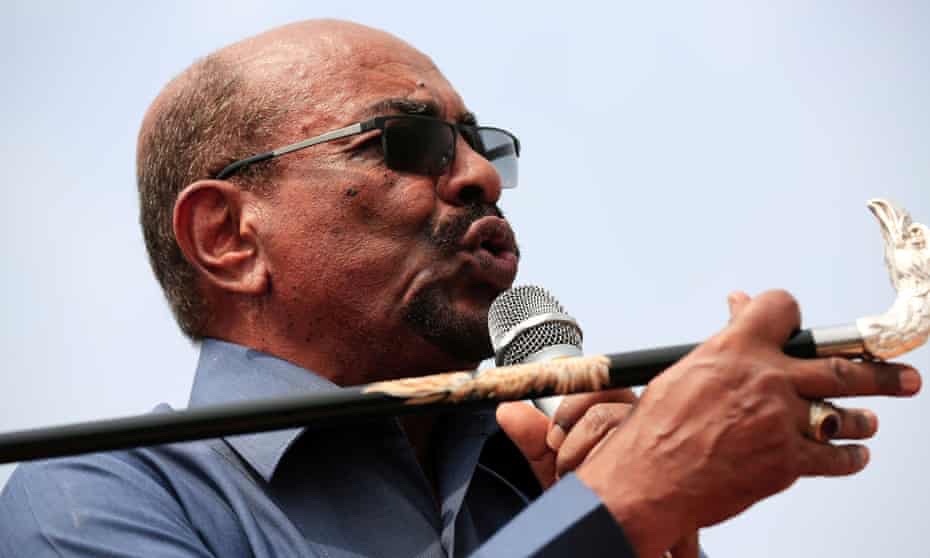 Editorial: Sudan has now breached a cardinal principle of the AU. No change of government by force of arms. Sudan will now be excluded from the AU until it reverts to democratic rule.

Sudan’s army has removed President Omar al-Bashir from power after 30 years, following months of protests that escalated at the weekend when demonstrators began a sit-in outside the defence ministry compound in central Khartoum.

Bashir had been arrested “in a safe place”, the Sudanese defence minster and army general Ahmed Awad Ibn Auf said in a statement broadcast on state media. A military council will take control of the country for two years, after which elections would be held, Ibn Auf added.

“For a long time, examining what’s going on in the state and the corruption that is going on,” he said. “The poor are poorer and the rich are still rich and there are no equal chances for the same people.”

The military seized control of state television shortly after dawn on Thursday, amid unconfirmed reports that Bashir was under house arrest at his residence in the defence ministry compound. There were also reports that several senior figures close to Bashir in the ruling National Congress party had been detained.

Ibn Auf said political detainees would be released but that a state of emergency would continue for three months and that a curfew from 10pm to 4am would be enforced for at least a month. All ports will remain closed for 24 hours.

Sudan, one of Africa’s biggest and most strategically important countries, has been paralysed by months of protests that erupted on 19 December in the eastern city of Atbara after a government decision to triple the price of bread, but quickly evolved into nationwide demonstrations against Bashir’s rule.

Though the removal from power of Bashir was welcomed with joy by protesters, the army’s decision to impose a curfew is a direct challenge to the thousands who have occupied a crossroads in the centre of Khartoum for five days. It is currently unclear how demonstrators will react, raising fears of bloodshed if they refuse to disperse.

Attempts by security forces to break up the Khartoum sit-in have already killed at least 22 – including five soldiers, who organisers said were defending the protesters – and injured more than 150.

The army has won considerable goodwill among protesters by protecting them from security services and pro-Bashir militia in recent days. Earlier this week, opposition leaders called for the military to step in to form a transitional government.

Sudanese protesters flash the victory sign as they march towards the military headquarters. Photograph: -/AFP/Getty Images

“Sudanese always believe that transition should come through the military. All are mindful of what instability could cause. Any chaos could have a very high cost,” said Saif al Din Abdelrahman, a Sudanese economist and expert based in Kenya.

As anticipation built, state television and radio played patriotic music, reminding older Sudanese of how past military takeovers unfolded in the country, and images of recent protests. Despite a lack of concrete information about what was happening for much of the morning, tens of thousands of Sudanese marched through the centre of Khartoum in jubilation, dancing and chanting anti-Bashir slogans. Protesters outside the defence ministry chanted: “It has fallen, we won.”

There were sporadic protests elsewhere in the country, and some reports of shooting by security services.

Footage posted to social media showed people tearing down posters depicting the president in Khartoum and marching on prisons and police stations.

Bashir is a former paratrooper who seized power in a bloodless coup in 1989 and has managed his way through one internal crisis after another while withstanding attempts by the west to weaken him.

The 75-year-old faces genocide charges at the international criminal court relating to extensive human rights abuses perpetrated by Sudanese forces against civilians in Darfur, the western region gripped by conflict since 2003 when rebels took up arms against the government, accusing it of discrimination and neglect. The UN says 300,000 people have died in the conflict and 2.7 million have fled their homes.

However, many other leaders and governments in Africa have defended Bashir.

In October 2017, the US eased sanctions against Sudan, citing improved humanitarian access, the mitigation of conflicts within the country and progress on counter-terrorism. Human rights organisations condemned the move.

Ibn Auf is a controversial figure himself, blacklisted by Washington for his role as the army’s head of military intelligence and security during the Darfur conflict. He has been defence minister since 2015 and was promoted in February by Bashir to the role of first-vice president.