Edo State is one of the states in the country where the politics has always attracted the attention of the nation due to the fact that the players are politically sophisticated. Peoples Democratic Party (PDP) ruled in the state during the leadership of late Chief Tony Anenih until November 12, 2008, when the former labour leader, Comrade Adams Oshiomhole emerged the governor after the Appeal Court sitting in Benin declared him the authentic winner of the April governorship election in the state and that saw the end of the PDP era in the state. Oshiomhole, brought the Action Congress which later became the present All Progressives Congress (APC) to the South South. 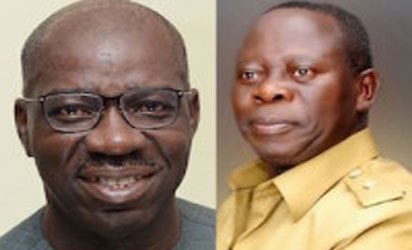 Through his persuasion, oratorical prowess and goodwill, Oshiomhole collapsed the PDP in the state after majority of the foot soldiers of Chief Tony Anenih, those of the Esama of Benin, Chief Gabriel Igbinedion and others joined his moving train. He embarked on developmental projects across the nook and cranny of the state, in fact building what is known today as the modern day Edo state.

His developmental strides endeared him to the people of the state and he broke all barriers particularly the ethnic sentiment when he won his re-election in the entire 18 Local Government Areas of the state, making him the first executive governor to achieve such feat in the state.

However, in 2016 when his administration got to an end, like a ruthless politician that he has become, Oshiomhole anointed his successor in the person of Godwin Obaseki, who was then the chairman of the state Economic and Strategic Unit.

Though Saturday Vanguard gathered that most of the leaders of the party from Edo South were opposed to Oshiomhole anointing Obaseki the former labour leader ignored their advice and ensured he had his way.

It was not an easy decision for him to make, particularly when his then deputy, Dr Pius Odubu, his political foot soldier, Osarodion Ogie, former Minister of Works, Engr.Chris Ogienwonyi and Gen. Charles Airhiavbere were in the race.

Both Ogienwonyi and Airhiavbere were men with deep pockets and Obaseki would not have survived their onslaught if not for unwavering support of Oshiomhole. Apart from the duo, Oshiomhole persuaded Ogie, to step down for Obaseki but Odubu who was enjoying the support of the veteran politicians in the state went to the field due to his strong conviction that his political experience would give him victory at the primaries.

However, his boss Oshiomhole, who knew his strength was able to stop him at the primaries. That was how Obaseki emerged the APC candidate and eventually governor of Edo state today.

The candidate of the PDP in that election, Pastor Osagie Ize-Iyamu who was a strong member of the ACN then was equally a big threat to the APC but Oshiomhole used his foot soldiers such as Obudu, Osakpawa Eriyo (No molest), Patrick Obahiagbon, Ogie, Charles Idahosa, Lucy Omagbon and her husband Harrison, Lawrence Orka, Chief Osarodion Idah and many others to deliver Obaseki in Edo South where Ize-Iyamu is very popular. At the end of that very fierce contest Obaseki emerged governor, Oshiomhole’s political son, Philip Shaibu became his Deputy while Ogie is currently the Secretary to the state Government.

Oshiomhole said Obaseki was an economic expert. He made people to believe so but they never knew about his personal relationship with people. The moment he became governor, of course he took control, and severed relationship with those who brought to him to power. Osakpanwa, the then youth leader of the party was arrested and thrown to Oko prison. Osakpanwa was one of the first people Oshiomhole convinced to work for Obaseki during the primaries. He was said to have spent his personal resources due to his family ties with the Obasekis.

But he fell out in the new order. Apart from Osakpanwa, Shaba, Chief Francis Inegbeneki, Dr Okoro who was the Oredo party chairman, and practically all the APC ward chairmen in the governor’s Oredo Local Government Area, Sunday Osaguana (Sunny Shark) including Madam Lorettar, Oredo woman leader, were arrested and detained but were later released. As a matter of fact, Chief Inegbeneki was declared wanted until Oshiomhole intervened in the issue between him and the governor.

Apart from these party leaders who suffered detention, APC leaders such as Dr Odubu, Charles Idahosa, Oshiomhole’s former political Adviser, Samson Osagie, Gen.Charles Airiavbere, Engr.Chris Ogienwonyi, Lucy Omagbon and her husband Harrison and many other party leaders were completely alienated from the party. Odubu’s pension is yet to be paid.

The governor was said to have gone on to ban political leaders from entering Government House declaring on several occasions that “Government House is not where they share money but for serious businesses”.

Apparently referring to the administration of Oshiomhole, where the former governor was in the habit of patronizing politicians through contracts and other incentives with a view to keeping members happy, Obaseki informed politicians that the days of sharing money was over. In Uhumwonde LGA, Idahosa was dethroned as leader of the party in the Local Government.

In Ovia, the Ogbomo of Udo and Pa Evbuowan were pushed aside and Dennis Idahosa was enthroned as leader. They further dissolved all the youth bodies who were collecting levies on behalf of the state government, rendering almost all the APC youths jobless. The APC in Edo state was no longer an interesting forcing and some of the leaders such as Mrs Omagbon and her husband left for the PDP.

Edo is yet to open the Benin Central Hospital built by Oshiomhole, even after the former governor equipped the hospital with modern hospital equipment. Against the earlier agreement that the governor would concentrate in running the government while Oshiomhole and other politicians would run the politics, the governor was said to have reneged and insisted that as the governor, he would run the party. This is said to be the root of the brewing crisis between him and his former boss, Oshiomhole.

The alleged disagreement between the governor and his predecessor Oshiomhole was said to have heightened prior to 2019 general elections when the duo disagreed on the choice of candidates for the party.

As a result, he wanted candidates would defeat the PDP candidates particularly in Edo Central where the PDP’s footprint has been solid. But the governor was said to have thought otherwise and ensured that his own candidates emerged. The same situation in Edo South, the governor’s senatorial district.

It was gathered that the governor isolated Oshiomhole, who is now the National Chairman of the party in the planning of the 2019 general elections, rather aligned with Ogie and Shaibu to plan the elections. Oshiomhole’s fears appeared justified with the result of the 2019 presidential and National Assembly elections, where the party lost woefully in the Edo South and Central senatorial districts to the PDP. A security report prior to the elections that the APC was going to lose the state to the PDP was ignored.

As a matter of fact, the governor was informed that he might even lose his Oredo Local Government if urgent steps were not taken. At last, he lost his ward, Local Government and his South senatorial district, as earlier warned, to the PDP.

But Oshiomhole held his Edo North solid for the APC in the Presidential and entire National Assembly seats. It was gathered that if not for the last minute effort made by Oshiomhole when he invited all the angry leaders such as Odubu, Ogienwonyi, Airhiavbere for a meeting at Government House and his road show, it would be a disastrous outing in Edo South for the APC. It was the first meeting these leaders would be holding with the governor after Obaseki was elected governor in 2016.

After the party lost woefully in the National Assembly and Presidential elections, it was now clearer to the governor that he was going to get into more trouble if the PDP took over the House of Assembly. He decided to change tactics after he was alleged to have accused some leaders of betraying the trust he had in them by not judiciously using the party money budgeted for the election for that purpose.

From reports in the media, it is obvious that Obaseki has kicked off campaigns for a second term with the series of endorsements he is currently enjoying. But there is also opposition from some people in the party who have vowed to ensure that they stop him. The battle for the soul of the APC ahead the 2020 governorship election will be a fierce one.

It was reliably gathered that Odubu, Airhiavbere, Ogienwonyi are going to contest the primaries with Obaseki. It was even gathered that Benin born business mogul, Capt.Okunbo may also join the race. However, Obaseki it was learnt is not sleeping and he is determined to avoid the Ambode treatment in Edo. To fight the battle ahead, it was learnt that the governor has succeeded in recruiting the Oshiomhole foot soldiers in his cabinet such as the incumbent deputy governor, Shaibu and Ogie the SSG. It was gathered that Ogie who is allegedly still angry with Oshiomhole for not giving him the ticket last time, had decided to join forces with Obaseki to fight for his re-election.

Chief Osaro Idah and Lawrence Okah are leading the Oredo forces for Obaseki. Infact they are popularly referred to as OIL, meaning Ogie,Idah and Lawrence. Shaibu, who is from the same Edo North with Oshiomhole is said to be angry that Oshiomhole allegedly denied some of his lieutenants’ ticket in the last APC primaries.

Besides, it was said that the deputy governor believed that Oshiomhole should give way so he can become the political leader in Edo North as the number two citizen. As a result, he has continued to build structures in Edo North for Obaseki. Oshiomhole’s former political Adviser Charles Idahosa who Oshiomhole saved his political career when Obaseki removed him as leader of the party in Uhumwonde, has also been recruited by Obaseki.

Oshiomhole had kept mum so far over the political situation in the state and his numerous supporters across the state are waiting for his orders to confront these people. But there are also possibilities that all of them would work together again as differences would always occur in politics. Good governance is what matters and what would eventually count and not pursuit of individual interests.