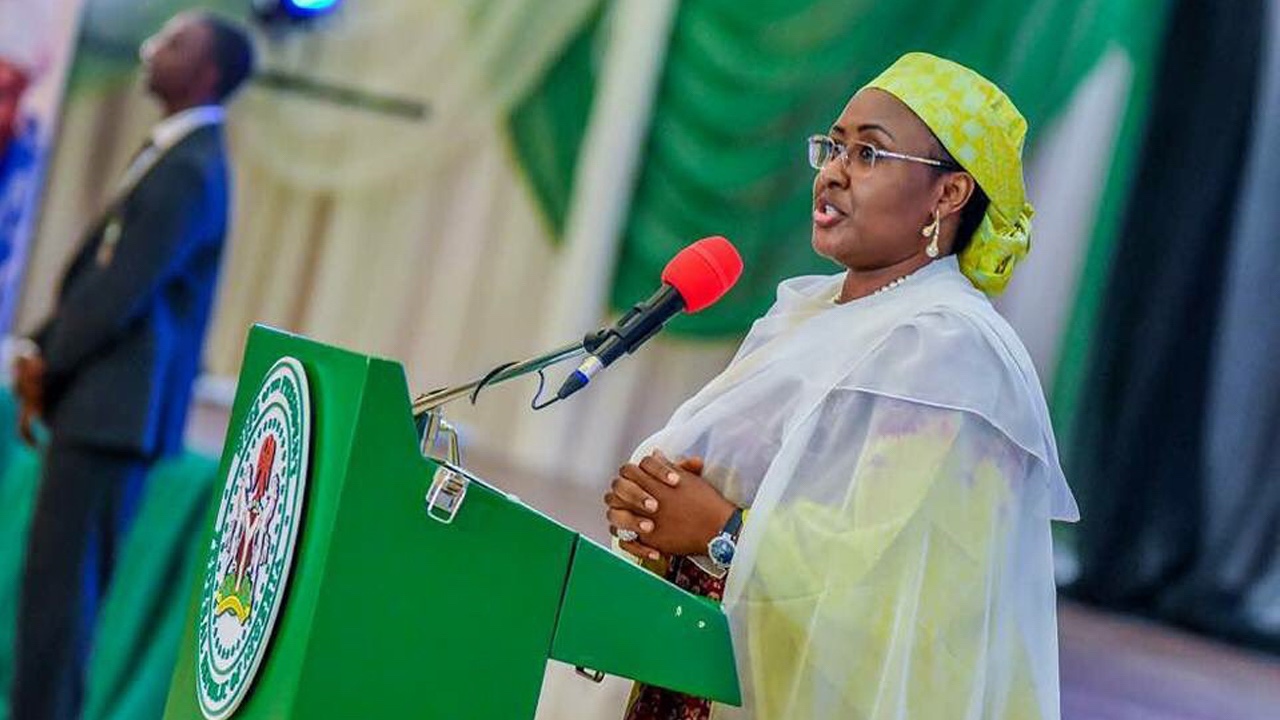 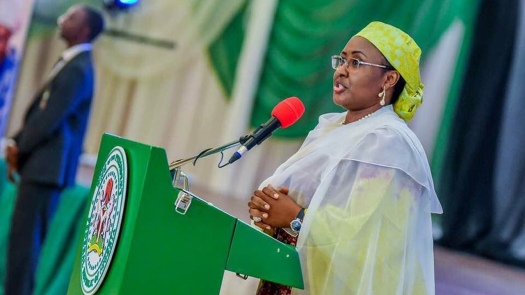 Nigeria’s King of the novel, Professor Chinua Achebe wrote ‘Anthills of the Savannah’ after a twenty-one year writing hiatus. It was a Locus Classicus on a satire against military dictatorships. It was the inevitable clash between the military authority and the media.The antagonist, Ikem Osodi who was suspended as the Editor of the government owned National Gazette by his erstwhile close friend, President Sam was asked a question on what he thought about the rumour that the Central Bank intended to use the President’s face in one of the currencies. His reply was that it was an incitement for the people to take it off. He was quoted out of context by his successor with a screaming caption ‘Ex Editor advocates regicide.’ This culminated in his eventual death by the brutal security forces. There were violent protests after his demise and the planned implantation of President Sam’s head was forced to be rescinded.

At a meeting with some stakeholders in Adamawa state, First Lady Aisha Buhari said she planned to build a private university to be named after her husband. There will be a planned partnership with educational institutions in Sudan and Qatar. It is still not clear where it will be cited. This is a monumental tragedy for the nation that the First Lady wants to use her influential office to build a university for personal use. An institution where the children of the impoverished will never be able to attend. Many of these impoverished lost their means of livelihood or jobs as a result of the anti-people economic policies of her husband. She has not used her highly esteemed office to ensure that our public universities are functioning at optimal level. The government owned universities used to be the leveler which brought together the children of the wealthy and the less privileged. She was a beneficiary of the public school system. Why is she now throwing away the ladder now that she has reached her destination?

The office of the First Lady is supposed to be largely ceremonial. They, like civil servants should be seen and not heard. It was Late Maryam Babangida that redefined it and since then her successors have followed suit. When Buhari was elected in 2015, he caught the picture of an austere man who preferred a Spartan lifestyle to one of ostentation. He gave the impression that he would scrap the unconstitutional role of the First Lady and run an extremely lean administration. It didn’t take long before the nation began to see the visibility of this former beauty therapist who wanted a voice of her own. She even went as far as blasting her husband’s government publicly.

Buhari said he only had 150 cows in 2015. How on earth will Aisha fund the establishment of the university which will certainly be of world class standards? Isn’t this a brazen form of corruption as she may most likely take advantage of her position to raise funds from the organized private sector who are at her beck and call? We recall vividly how former President Olusegun Obasanjo harassed our corporate titans to contribute towards the building of his presidential library while he was still in office. Our rent seekers masquerading as businessmen fell over themselves to satisfy Baba Iyabo’s rather insatiable appetite. In the end obscene billions was raised which would have made the Ebora of Owu grasp for breath.

Who is going to own the university? Is it her or a board of trustees? It will most likely be her as she alone seems to have the prerogative of naming it after her husband. It’s an abuse of office not only for her to build it but to have it named after her hubby while he is still in office. This is worse than the theatre of the absurd as hapless Nigerians will be the worse for it. Is she thinking of a scholarship scheme to help the hoi polloi in that university? What is the rationale behind the building of a university when most of the existing ones are nothing short of glorified secondary schools? Is there any need to add any to the already overcrowded space? Many of these universities don’t have well trained members of staff as they hire from the public universities on a locum basis to make up for their shortfall. Most of them ban student unionism and treat their undergraduates as kids who can be expelled at the slightest provocation at any time.

The Adamawa born First Lady is not known to have any progressive views on education that can have a great impact on the nation for the good of all. Her sole aim of the university is disgustingly purely mercantilist. During the Second World War, the then United States First Lady, Eleanor Roosevelt was practically the Florence Nightingale of the nation as she was the rallying point of nurses both at home and overseas. Her actions and inspiring speeches gave the soldiers a ray of hope while fighting the spread of Nazism. Her legacy is that some of the healthcare laws have some of her imprints. There is a huge state of emergency in the educational sector which Aisha is blind to. She is nothing short of an opportunist who wants to capitalize on the rot in this highly important sector to selfishly advance her personal interest while feathering her nest. Concerned Nigerians shouldn’t take this lying low. We should shake ourselves out of her usual lethargy and ensure that this project doesn’t see the light of day.

There should be protests and peaceful demonstrations against this flagrant abuse of privilege and power. Nigerians have been hoodwinked and taken for a ride for far too long. Fela the Afrobeat maestro and visionary foresaw this as far back as the 1970’s and put it on the fear that we have sadly refused to conquer. The cold hearted elite know this and they have used the fear of death to hold us to ransom as if this world is anyone’s permanent home.

Most Nigerian leaders acquire business interests through the aid of fronts. Aisha is so brazen as to want to be in the forefront of this proposed mega acquisition. Women are making giant strides the world over blazing trails in sectors once dominated by men. It is tragic that this supposed ‘role model’ is hell bent on setting a bad precedent for the younger generation of women. She wants to emerge as another Lady Macbeth who goaded her husband to destruction and perfidy.Enough of this hocus pocus! Let posterity be the ultimate judge and judge us fairly.