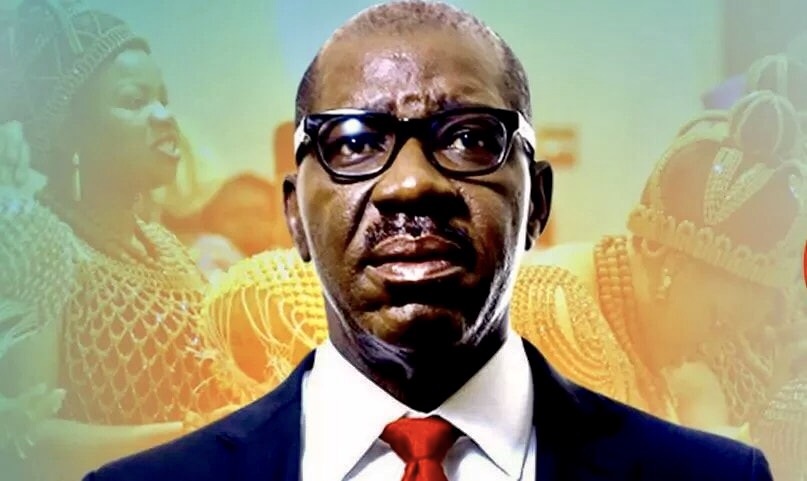 It took the inauguration of Edo State House of Assembly for the crisis of confidence and political unease between Governor Godwin Obaseki and the national chairman of All Progressives Congress (APC), Adams Oshiomhole to blow open. Prior to the proclamation and its attendant brouhaha, both leaders put up a vain show of public diversion to deny any crack in their buxom relationship.

But watchers of Edo politics saw the breach coming when during the last primary elections in the state, the incumbent was not allowed to have a say in the caliber candidates the state chapter of APC wanted to field in the election.Yet, as a knowledgeable technocrat, Governor Obaseki took the breach in his stride, choosing rather to lie low until the fullness of time for the mischief to mature. Penultimate Tuesday the devious plot to ambush the Governor came into full national glare.

It could be said that Obaseki scored a bull’s-eye by the finesse he deployed to ensure the emergence of a loyal Speaker in the person of Okiye. That masterstroke succeeded in drawing out Oshiomhole to pass the snide remark that “we have 24/24 (lawmakers in Edo Assembly) all of them APC, but somebody wants a particular person as speaker, 19 out of the 24 are opposed to this person.”

Having come to that curious turn in their political hide-and-seek games in Edo State, the verdict of most people in the state, particularly APC faithful, is that the political battle with Obaseki is one that Oshiomhole will not survive for a variety of reasons.

GOING demographic considerations, the odds are stacked against the APC national chairman, because coming from Edo North, there is no way he could best Obaseki, who hails from Edo South, even if he (Oshiomhole) decides to curry the support of Edo Central, which is very doubtful.

On a national scale, the former Edo governor and labour leader does not command the willing support of party faithful just as he has not cultivated the friendship of APC state governors. Within his short stint as national chairman, Oshiomhole has stepped on many executive toes from north to south.

In Zamfara, Kaduna, Bauchi, Kogi, Adamawa, Ogun and Lagos, the national chairman courted the pain of state governors. Most importantly, in no other states than Lagos and Zamfara did Oshiomhole expose his bag of mischief and double-face during the last governorship primaries of the party.

It could therefore be taken for granted that with the sordid tales from those APC states, incumbent and immediate past governors would rally round Obaseki if the push from Oshiomhole turns to a shove.

Even with his aloof political posture, there is no guarantee that President Muhammadu Buhari would fail to sacrifice the APC national chairman in the event that the party’s state governors decide to take a stand against him, a move that sources disclosed was mooted during the recent meeting between the progressive governors and Buhari.

It could be recalled that some state governors had initially opted to gift the immediate past national chairman, Chief John Odigie-Oyegun with tenure elongation primarily to thwart the president’s endorsement of Oshiomhole. The governors had also promised to foot the bill of organising a midterm convention when Oyegun disclosed that funding was his administration’s challenge.

Against the background of his perceived belligerence and autocratic bent, it does not seem probable that Oshiomhole could muster substantial tacit support of various caucuses of the party in the country, talk less of the state governors.

Not that alone, having served complete two terms of eight years in office as governor before mounting the saddle as national chairman, the preponderant notion among Edo people is that Oshiomhole wants to transmute into a small emperor in the state.

The state secretary of APC, Mr. Charles Idahosa, who made that analogy, said the party’s national chairman was playing godfather in Edo politics, recalling how Oshiomhole introduced Obaseki as the engine room of his administration.

While noting that Obaseki has exceeded public expectations in his performance and track record of achievements in office, Idahosa said: “It was the same Oshiomhole that imposed a running mate on Obaseki, (the present deputy governor) and Osarodion Ogie, the current Secretary to the State Government (SSG).”

Apart from the reservations of politicians in the state, the Edo State electorate wonders what the former governor wants after eight years in the same office that Obaseki is occupying. Moreover, there is growing public resentment against the national chairman as the people accuse him of laying obstacles on the path of Obaseki to distract the governor from his developmental agenda.

Idahosa, who is a former aide to Oshiomhole declared that if an idea does not emanate from the national chairman, he considers it as rubbish, stressing that Edo people have had enough of his high handedness.

OSHIOMHOLE’s testimonial that Obaseki was the engine room during his own administration is on record. Now, the people are using it to evaluate the incumbent. It is their evidence that Governor Obaseki cannot be dismissed without basis.

According to Monday Nosakhare, a native of Edo State, Governor Obaseki is seen as a man on rescue mission, pointing out that working tirelessly behind the scene as the chairman of the Economic Strategy Team (EST), Obaseki made sure that funds were generated to drive the programmes and policies of the Oshiomhole administration.

Nosakhare said it was regrettable that after describing Obaseki as the brain box of his administration and declaring that the state needed such a successor with financial expertise, should Oshiomhole turn around to be fighting him? He said it boils down to petty jealousy.

Insisting that Obaseki was actually doing miracle to keep revenues coming, Nosakhare remarked that the governor embarked upon aggressive revenue generation through the deployment of technology, “which enhanced revenue collection and minimised leakages.”

He disclosed that it was by plugging loopholes for revenue leakages that the governor earned criticisms from the very few individuals that were feasting on the state and corruptly enriching themselves.While explaining that most of those badly hit by Obaseki’s reforms in the revenue generation sector gravitated towards the APC national chairman to wage political opposition against the Governor, Nosakhare said the effectiveness of the system became well known to Edo people, since according to him, internally generated revenue shot up by as much as 500 per cent.

Second term elections are usually a referendum on the performance of an incumbent in office. Some believe that Governor Obaseki has made a lot of improvement in governance so far. Nosakhare said the Ogbemudia Stadium is one area the governor’s effort is being appreciated by the youth, stressing that on completion, “the stadium that was last renovated in 2002 for the National Sports festival will have a brand new tartan tracks, seats, swimming pool, boxing, lawn tennis courts, and above all, an all covered stand.”

He added that Obaseki’s support and commitment to sports development led Bendel Insurance Football Club to gain promotion to the elite division of the professional league after 11 years in the lower division.

According to the public servant, “while majority of the people appreciates the governor’s strides, few however, are not appreciative and want the old order, where they will continue to line their pockets with state resources.“It is this few enemies of Edo that have turned themselves into political agitators and launched the drum beat of war ahead of the 2020 governorship election that is still over a year away.”

Also a chieftain of APC in the state, Mr. Martins Osakue, said well-meaning politicians in the state chapter of the party are solidly behind Obaseki, insisting that only a handful of greedy politicians are against another term for the governor over his refusal to settle them with monies meant for the development of the state.

With the people voicing positive sentiments about Obaseki’s performance, the public sympathy and his initiatives in office could render the political mischief devised by his former benefactor incapable to dislodge the governor.

However, Oshiomhole has his die-hard crowd and it might be unwise to think he would surrender without a fight. That has made the political scene in Edo very interesting. In the days and months ahead, it would be clear who is the harder nut to crack between Obaseki and his former boss.