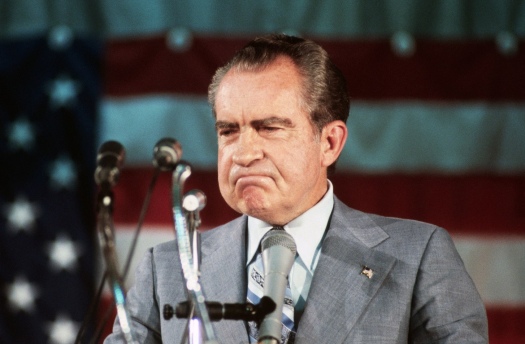 HELL (The Borowitz Report)—The former President Richard M. Nixon became the latest person to call for Donald J. Trump’s impeachment on Monday, holding an extraordinary press conference in Hell to do so.

“I see the news every day and I shake my head,” Nixon said, the infernal flames of Hades licking his jowls. “How has this bastard not been impeached yet?”

The former President said that the Watergate scandal, which led to his resignation from office, was “like jaywalking” compared to Trump’s interactions with a foreign government.

“I’ll admit that my subversion of democracy wasn’t ideal, but this Ukrainian business is some next-level shit,” Nixon said.

Though clearly aggrieved that Trump has thus far received more favorable treatment from Congress than he did, he showed some grudging admiration for the current occupant of the White House. “If he’s not impeached, he’s the luckiest bastard in the world, and I’ll tell him that when he gets down here,” Nixon said.