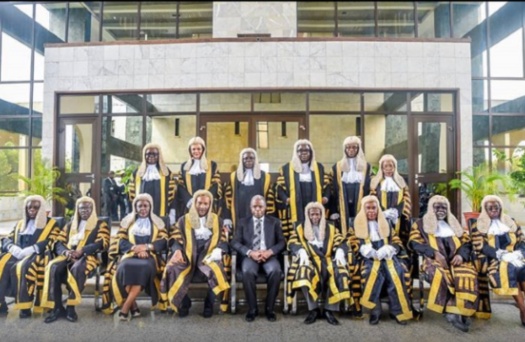 TWENTY odd years into the Fourth Republic, democracy is still taking baby steps. On a dispiriting note, the country’s chief jurist has reopened the long-running debate on the perceived lack of independence of the judiciary. The insight from Mohammed Tanko, the Chief Justice of Nigeria, alluding to the fact that the judiciary is still beholden to the executive arm of government for its basic operations, puts our democracy on a wobbly ground.

For a long time, there had been a notion that the judiciary could be influenced – either by government’s strong-arm tactics or by crooked litigants, particularly desperate politicians. This dispensation has witnessed the best and the worst of the bench, most often in election cases. The late Supreme Court jurist, Kayode Eso, once described some judges who handled election cases as “billionaire judges.” In a particular case, a CJN asked a president of the Court of Appeal to “arrest” the judgement of a governorship contest in a Northern state.

Determined to turn the tables, Tanko, at the special court session marking the commencement of the 2019/20 legal year, advocated a new paradigm. Hinging his position on the current template in which the bench waits interminably on the executive to survive, Tanko, who assumed office early this year, reawakened an old debate on the abridgement of financial freedom of the judiciary, which is fundamentally at the heart of its independence.

Forthrightly, he argued, “If you say that I am independent, but in a way, whether I like it or not, I have to go cap in hand asking for funds to run my office, then I have completely lost my independence. It is like saying a cow is free to graze about in the meadow but at the same time, tying it firmly to a tree. Where is the freedom? Be that as it may, when we assess the judiciary from the financial perspective, how free can we say we are?” This is sobering.

Back in August, Tanko had initially expressed strong reservations about the plight of the judiciary. He had stated, “If you say that I am independent, but in a way, whether I like it or not, I have to go and bend down, asking (for funds), I have lost my independence.” Undoubtedly, no judiciary can prove its mettle under this cloud.

In theory, there is separation of powers among the three arms of government – the executive, legislature and judiciary. This ought to cushion the interference among the arms, but with the executive controlling the purse strings, this independence is a mirage. Subtly, the executive exploits this to control the judiciary. The salaries and budgetary allocations of judges are poor, Tanko affirmed.

Although judges deserve equitable treatment, the executive makes a fanfare whenever it undertakes any project for the bench. As such, governors can heavily publicise the procurement of cars for judges. At times, when they refurbish, build or equip courthouses, they make a meal of it. In September, Ondo State governor, Rotimi Akeredolu, demonstrated this when the state presented 20 sport utility vehicles to its judges. This is belittling for the judges. The governor, his cabinet members and aides use these vehicles without any grandiose noise being made about it.

Unfortunately, this absurdity is familiar. Past CJNs had also lamented the incapacitation the judiciary was suffering. In 2013, Mariam Aloma-Mukhtar, the then CJN, expressed reservations about it. She said, “Statistics have shown that funding from the Federal Government has witnessed a steady decline since 2010 from N95 billion in that year to N85 billion in 2011, then N75 billion in 2012 and dropped again in the 2013 budget to N67 billion.”

Conversely, in the United States, once the Congress appropriates the funding for the American judiciary, the money goes directly to it after being signed off by the president. The practice there is to present the budget proposals a year ahead, just like the rest of the American budget, which gives the stakeholders the time to work on the process.

Positively, things might have eased a bit marginally under Buhari, but it is not fundamental. In March 2018, Walter Onnoghen, Tanko’s predecessor, said the independence of the judiciary was dependent on the level of funding received. “The issue of adequate funding at the state level is one of the greatest challenges confronting the judiciary of this nation,” he said.

To strengthen democracy, the executive should treat the judiciary, as it does the legislature. Already, the National Assembly has unyoked itself – and the judiciary supposedly – from the clutches of the executive with the First Alteration Act 2010. In Section 6, the Act amended Section 81 (3) of the 1999 Constitution by elevating the Independent National Electoral Commission, NASS and the judiciary to First Line Charge.

It means the funding for these federal organs go directly to them. In apparent recognition that this is lacking at the state tier, President Muhammadu Buhari, in June, assented to the Fourth Alteration Act, which grants financial autonomy to the state judiciary and legislature. (The Niger Delta Development Commission, the Public Complaints Commission, the Universal Basic Education Commission and the National Human Rights Commission are also enjoying this status.)

It is a vital step aimed at enhancing the independence of the judiciary, but obviously, it seems to be only on paper. Otherwise, the persistent complaints of financial bondage would have abated. Therefore, the three arms of government have to interrogate the reasons why the law is not working for the judiciary as it is effectively doing for NASS. Is it that the legislature is more powerful or more important than the judiciary? This cannot be the case, for the judiciary is a separate arm of government, which has the power to override both the executive and legislature, and deliver the rule of law and give justice to the common person.