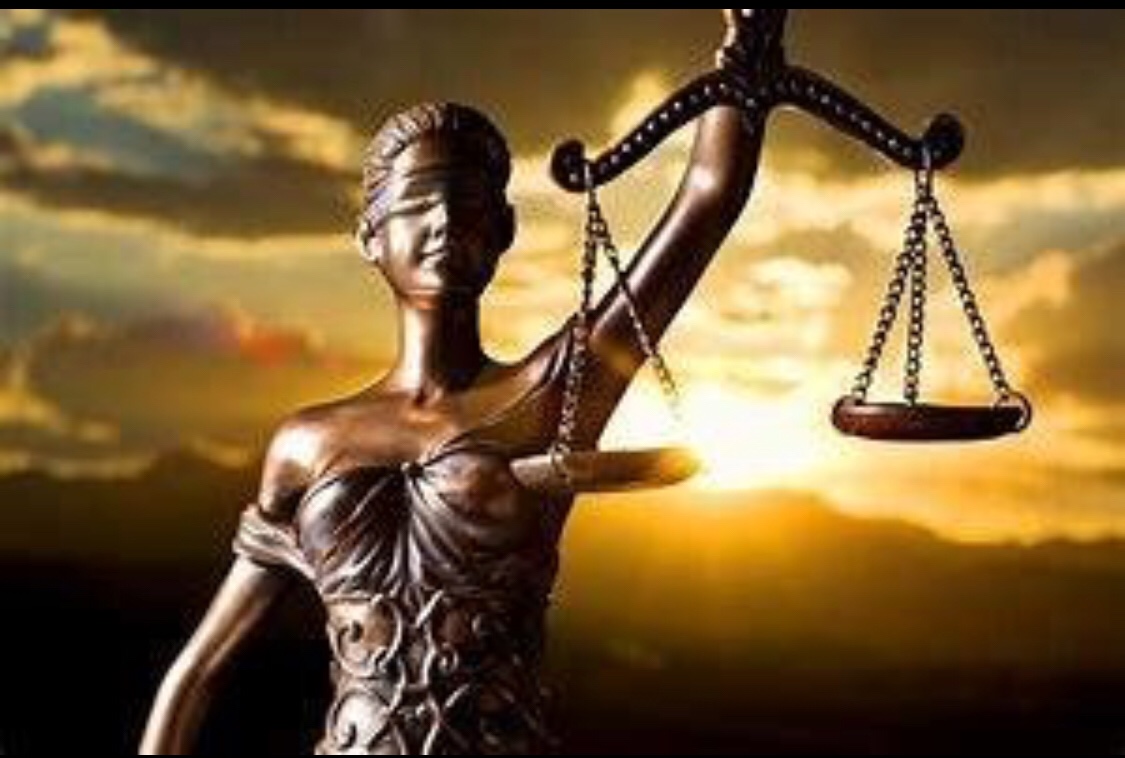 There used to be a time, once Chris Grayling had hung up his butcher’s apron at the Ministry of Justice and Theresa May ushered in a quieter, more respectful justice strategy of wanton neglect, that I wrote about something other than Boris Johnson. Unfortunately, the Prime Minister keeps booting the justice football around the pitch with the swagger and fervour he usually reserves for tackling small children, so I feel that the decision is being taken largely out of my hands.

Today, in advance of tonight’s first leadership debate, a raft of Tuff On Crime initiatives have been peppered across the bulletins. We woke up to whole life sentences for child killers, and are ushering in twilight with a guarantee of immediate arrest, charge and court appearance for those carrying knives. Short, snappy policy snackettes that have the advantage of electoral delectability and tabloid acclaim, and only the minor drawback of being entirely pointless and/or unworkable.

As with so many recent announcements on criminal justice, there is a risk that fact-checking the substance only serves to amplify unreliable headlines, but it is worth looking closer at exactly what this “life really will mean life” for “child killers” policy means.

The appeal is obvious. Monsters who murder children should be put away for a very long time indeed. As Justice Secretary Robert Buckland says today, writing in The Sun:

“Any adult who commits the crime of killing a child should spend the rest of his or her life behind bars. It is as simple as that.”

Before considering what the Conservatives are actually proposing, let’s look firstly at how the law currently works.

The first point to note is that despite the false claim by the Conservative spin machine that the proposed policy targets “child killers”, it doesn’t. It targets child murderers. There are, unpleasant as it undoubtedly is to dwell on, many ways in which people can be unlawfully killed. Unlawful act manslaughter, gross negligence manslaughter, corporate manslaughter, causing death by dangerous or careless driving, infanticide, causing or allowing a child or vulnerable adult to die, and murder. These are all discrete legal concepts.

Murder is the most serious. Murder, in law, is where a person unlawfully (i.e. not in self-defence or for any other lawful purpose) kills another person, intending either to kill them or to cause grievous bodily harm (really serious harm, is how it’s explained to juries). That may surprise you. You can be convicted of murder even if you didn’t intend to kill someone.

It follows, in case the point needs making, that, while all murders are serious, some are more serious than others. A distraught mother struggling with severe depression who shakes her child intending to cause really serious harm and unintentionally causes death is in a different category to a predatory paedophile who abducts, tortures and intentionally kills a toddler. Likewise a man who acts in genuine self-defence when attacked but goes overboard and, using unreasonable force, unintentionally kills a burglar is to be distinguished from a gangster who guns down a rival drug dealer. Forgive me labouring the point, but when politicians demand blanket “whole life” sentences for all people convicted of certain broad categories of murder, it is necessary to highlight the obvious injustice that would follow.

And this truism is reflected in how murder is currently sentenced.

What is the sentence for murder?

While all offences of murder carry a mandatory life sentence, what a life sentence means can vary. This is because a court has to firstly identify a “minimum term”, which is the minimum period that the defendant will spend in prison before becoming eligible for parole. If a person is deemed safe for release by the Parole Board (the test being whether the Board is satisfied that imprisonment is no longer necessary for the protection of the public), they will be released on “life licence”, with conditions. If at any time it is considered that they are a risk to the public, they can be recalled to prison.

How is the minimum term calculated? Judges must have regard to principles set out in Schedule 21 of the Criminal Justice Act 2003. This provides starting points, and the judge can then move up or down from the starting point to reflect further aggravating or mitigating features.

It’s worth a brief look at the different categories.

We can see that if the court considers that the seriousness of the offence is exceptionally high,and the offender was aged 21 or over, the appropriate starting point is a whole life order – in other words, no prospect of release. There is then a non-exhaustive list of examples of cases that would normally fall within this category, including, multiple sadistic or sexually motivated murders, terrorism, murder of a serving police or prison officer, and, significantly for our purposes, the murder of a child if involving abduction or sexual or sadistic motivation.

If a defendant is aged 18 or over and the seriousness is not exceptionally high, it may fall into the next bracket down, which provides for a 30 year starting point:

This category covers cases where the offender took a knife or other weapon (not a firearm – this goes into the 30-year bracket) to the scene of the murder and used it.

The court then considers the aggravating or mitigating factors which may result in the starting point moving up or down. Critically, the legislation allows for a “minimum term of any length (whatever the starting point), or in the making of a whole life order”  – in other words, even if a murder is not specifically included as an example of a whole life order, the judge still has a discretion if she thinks the seriousness is exceptionally high. 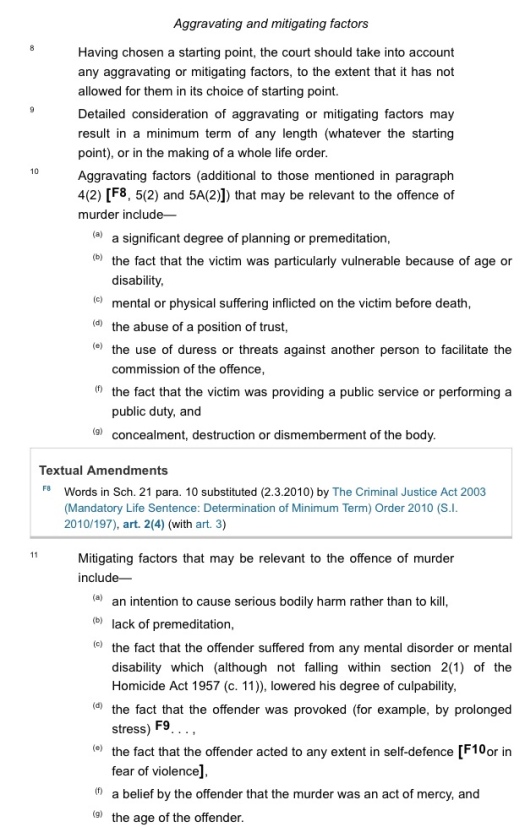 So that, put crudely, is the existing framework. What does the Conservative Party want to do?

What does the Conservative Party want to do?

Notwithstanding Robert Buckland’s boast to The Sun above, or his widely reported assertion that:

“any murderer who denies a young, innocent child the right to life surrenders their own right to liberty. They do so permanently, and they do so without exception.”

the truth is that there are a number of exceptions to this new policy, as admitted in the press release. For one, as we have already seen, it applies only to crimes of murder, not to all “child killers”. Many homicide offences which capture public attention do not in fact involve murder, and will not be affected. Secondly, whole life orders will still only be available for offenders aged 21 and over. Thirdly, although Schedule 21 defines a child as a person under 18, this new policy would be more restrictive, applying only to children under 16. Fourthly, only murders which are “premeditated” are caught by the policy. Fifthly, the press release concludes by stating that “the sentencing decision will continue to rest with the judge”. At its height, this policy appears to introduce a presumption that qualifying cases will be met by a whole life order, but this is by no means the automatic, life-means-life that has been sold to the tabloids.

On this final point, it appears that the government has failed to understand how the current system works, as the press release claims, falsely, that:

“The current rules require the murder to be of multiple children, or to be sexually or sadistically motivated, to attract a Whole Life Order, which is too restrictive.”

As we have seen, this is not what Schedule 21 says at all. It in fact expressly states the opposite – just because a type of murder is not listed in the examples of appropriate “whole life” cases does notstop a judge imposing a whole life order if she thinks the seriousness is exceptionally high. So the worst cases of the murder of children, say where an adult defendant commits a premeditated murder of a very young child, are already eligible for whole life orders.

In summary therefore, the Conservative Party either doesn’t understand (or is lying about) the law, and is pushing a policy to give judges a discretion to impose a sentence they can already impose.

How many cases will actually be affected?

Perhaps the most important question that has still not been answered by the government is how many cases this policy will actually affect.

The Office of National Statistics has been quoted in news reports as calculating a figure of 67 relevant cases involving the killing of children in 2018, but closer inspection suggests the true figure is much, much smaller. This figure of 67 includes offences of manslaughter and infanticide, not just murder. It includes the terrorist attack in Manchester. It also appears to includes child-on-child killings, which are regrettably common in inner-city inter-gang warfare. There is no apparent way of ascertaining how many of these 67 were murders, how many involved defendants over 21, and how many were premeditated. Nor can the government tell us how many of the cases which didinvolve the premeditated murder of children by adults in fact resulted in a whole life order anyway, and how many resulted in a minimum term which was unacceptably low.