A Facebook post published by AIT News Nigeria claimed that the man who drove the first person to test positive to the novel coronavirus in Nigeria to Ogun State escaped from a hospital where he was receiving treatment after he also tested positive to the virus.

The author of the post claimed that the picture it published was that of the driver named Adewale Isaac Olorogun and that he has demanded to be paid N100 million by the government before he could return for treatment.

The post also claimed that supposed Olorogun sent an SMS to Ogun State commissioner for health saying: nor be only una go chop the money, na my family turn, either una pay or una die, i go waka sotay plenty people follow me remove from this wayward country.

It was also claimed that the driver wished he could infect Nigerian President Muhammadu Buhari with the virus.

The post contains claims that are untrue. AIT Nigeria News is a clone of the African Independent Television’s page that passes itself across as the actual AIT Facebook page.

The page has a history of posting false claims. A Google reverse image search on Google showed the picture it shared as that of the driver was first published in a story written by Monica Mark for BuzzFeed News on December 15, 2018. It was taken by Fati Abubakar for BuzzFeed News. The same picture was pubished by BuzzFeed on Twitter, at least twice, on the same date. 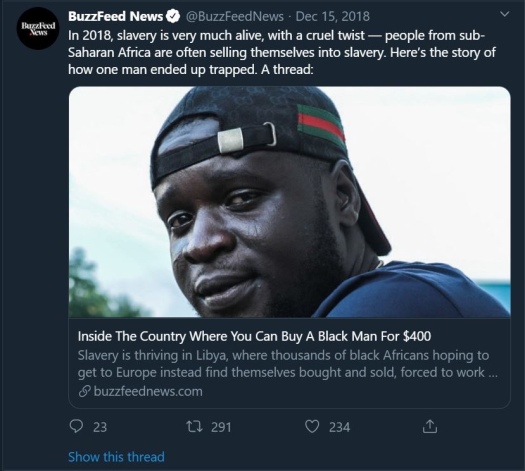 In that story, the name of the person in the picture was given as Jude Ikuenobe, a Nigerian who returned home after years of slavery in Libya.

Moreover, a spokesman to Ogun State governor also told The Sun that the Facebook post is fictitious and that no such thing happened.