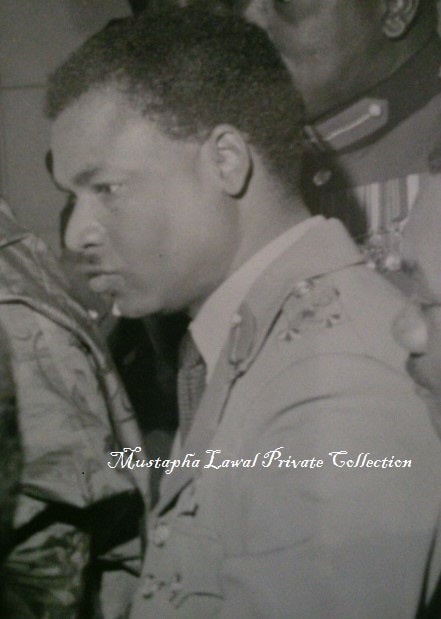 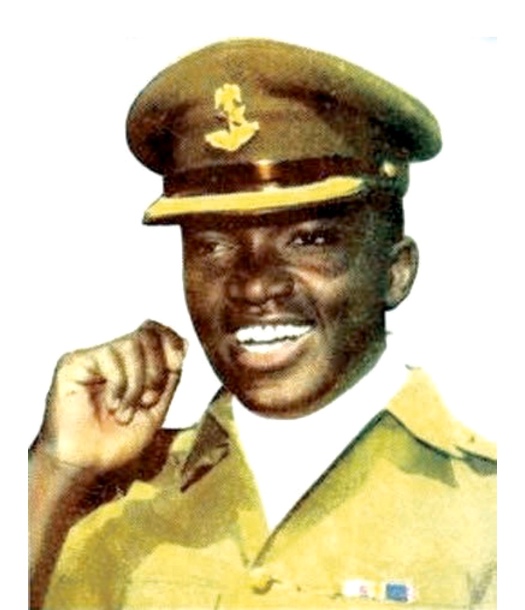 I was in the first cabinet that was overthrown by the military in this country. I entered parliament in December 12, 1959. And I remained in parliament until January 15, 1966 when the government was overthrown. I was the Federal Minister of Education in that cabinet. I woke up one morning in my official house in Ikoyi to discover that my telephone was not working. I had never experienced coup before nor did I know that it was a coup, thinking it was just a telephone fault; until a colleague of mine in the cabinet Chief Abiodun Akerele, came in and told me there had been a military coup. So I had the fortune or the misfortune of being a victim of the first coup in this country.

Many people may not know that I spent 18 months in detention in prisons across the country. I’ve spent time in KiriKiri prison, Ilesha prison, Ibadan prison and the Abeokuta prison.

This is the practice of the whole world. People have asked me to write my memoirs, I just laugh because there are certain things I can never reveal.

When I was in Tafawa Balewa’s Cabinet, all Cabinet Ministers had access to written intelligence report every month. That was the practice at that time. But when Shagari came in, for reasons which I cannot explain, that practice was no longer followed. But by virtue of my duties as the Attorney-General and as a member of the National Security Council, I continued to have access to some sensitive matters.

Unless you know this background, you will not know the root causes of our problems. The interest of the Europeans in Africa and indeed in Nigeria was economic and it’s still economic. They have no permanent friends and no permanent interest. Neither their interest nor their friends are permanent. Nigeria was created as British sphere of interests for business.

In 1898, Lugard formed the West African Frontier Force initially with 2,000 soldiers and that was the beginning of our problems.

Anybody that wants to know the root cause of all the coups in this book and our present problems and who does not know the evolution of Nigeria would just be looking at the matter superficially. Our problems started from that time. And Lugard was what they called at that time imperialist. A number of British soldiers, businessmen, politicians were very patriotic. But I must warn you, they were operating in the interest of their country. Lugard became a Lord. Nigerians, too, should operate in the interest of their country.

When Lugard formed the West African Frontier Force with 2,000 troops, about 90 percent of them were from the North mainly from the middle belt. And his dispatches to London between that time and January 1914 was extremely interesting. Lugard came here for a purpose and that purpose was British interest.

Between 1898 and 1914, he sent a number of dispatches to London which led to the Amalgamation of 1914. The Order-in-Council was drawn up in November 1913, signed and came into force in January 1914. In those dispatches, Lugard said a number of things which are the root causes of yesterday and today’s problems. The British needed the Railway from the North to the Coast in the interest of British business. Amalgamation of the South (not of the people) became of crucial importance to British business interest.

He said the North and South should be amalgamated. Southern Nigeria came into existence on January 1900. At the centenary of the fall of Benin, I wrote a piece in a number of papers but before I published the piece, I sent a copy to the Oba of Benin.

So when Benin was conquered in 1896, it made the creation of the Southern Nigerian protectorate possible on January 1, 1900. If you remember, Sokoto was not conquered until 1903. So, there was no question of Nigeria at that time. After the conquest of Sokoto, they were able to create the Northern Nigeria protectorate. Lugard went full blast and created what was to be known as the protectorate of Northern Nigeria.

What is critical and important are the reasons Lugard gave in his dispatches. They are as follows:

He said the North is poor and they have no resources to run the protectorate of the North. That they have no access to the sea; that the South has resources and that they have educated people. The first Yoruba Lawyer was called to the Bar in 1861. Therefore, because it was not the policy of the British Government to bring the tax-payers money to run the protectorate, it was in the interest of the British tax payer that there should be Amalgamation. But what the British Amalgamated was the Administration of the North and South. That is one of the root causes of the problems of Nigeria and the Nigerians.

When the amalgamation took effect, the British government sealed off the South from the North. And between 1914 and 1960, that’s a period of 46 years, the British allowed minimum contact between the North and South because it was not in the British interest that the North be allowed to be polluted by the educated South. That was the basis on which we got our independence in 1960 when I was in the parliament. I entered parliament on December 12, 1959.

When the North formed a political party, the Northern leaders called it Northern People’s Congress (NPC). They didn’t call it Nigeria’s people Congress. That was in accordance with the dictum and policies of Lugard. When Aminu Kano formed his own party, it was called Northern Elements Progressive Union (NEPU) not Nigerian Elements Progressive Union. It was only Awolowo and Zik who were mistaken that there was anything called Nigeria. In fact, the so-called Nigeria created in 1914 was a complete fraud. It was created not in the interest of Nigeria or Nigerians but in the interest of the British. And what were the structures created? The structures created were as follows: Northern Nigeria was to represent England; Western Nigeria like Wales; Eastern Nigeria was to be like Scotland.

In the British structure, England has permanent majority in the House of Commons. There was no way Wales can ever dominate England, neither can Scotland dominate Britain. But they are very shrewd. They would allow a Scottish man to become Prime Minister. They would allow a welsh man to become Prime Minister in London but the fact remains that the actual power is rested in England.

That was what Lugard created In Nigeria, a permanent majority for the North. The population figure is also a fraud. In fact, a British Colonial Civil Servant who was involved in the fraud was trying to expose it but he was never allowed to publish it.

The only exception throughout the zone is Nigeria. Nigeria is the only Zone whereby you go from the Coast to the North, the population increases and you come from the North to the Coast, the population decreases. Well, geographers, anthropologists and population experts, draw your conclusions. Someone has told me that the last population census was done by computer. What nonsense. A computer is as good as its programmer. A computer will produce what you ask it to produce.

I have read this book from cover to cover. This is a fantastic book. I want us to find a way to ensure that many Nigerians read this book. It is a raw material for future authors. There is one thing which is missing in this book and that is the first broadcast of General Ibrahim Babaginda when he assumed power in 1985. The broadcast is very crucial to the economic problems we have today.

All the Ministers were requested by the G.O.C. of the Nigerian Army, General Ironsi to assemble. What was amazing at that time was that Ironsi was going all over Lagos unarmed. We assembled there, having nominating Zana Diphcharima as our acting prime minister in the absence of the Prime Minister, whose where about we didn’t know. We approached the acting President, Nwafor Orizu to swear him in because he could not legitimately act as the Prime Minister except he was sworn in. Nwafor Orizu refused. He said he needed to contact Zik who was then in West Indies.

Under the Law, that is, the interpretation Act, as acting President, Nwafor Orizu had all the powers of the President.

The G.O.C said he wanted to see all the cabinet ministers. And so we assembled at the cabinet office. Well, I have read in many books saying that we handed over to the military. We did not hand-over. Ironsi told us that “you either hand over as gentlemen or you hand-over by force”. These were his words. Is that voluntary hand-over? So we did not hand-over. We wanted the Acting Prime Minister to be in place but Ironsi forced us, and I use the word force advisedly, to handover to him. He was controlling the soldiers.

The acting President, Nwafor Orizu, who did not cooperate with us, cooperated with the GOC. Dr. Orizu and the GOC prepared speeches which Nwafor Orizu broadcast handing over to the government of the country to the army. I here state again categorically as a member of that cabinet that we did not hand-over voluntarily. It was a coup.

There is a very good book, which everybody must read. It is raw material for future authors. Anybody, who wants to know some of the causes of our problems, military instability should read this book. I recommend this book to all universities and secondary schools, so that they can know how we got to where we are now.

What this book shows is that if anybody stages a coup and if people don’t accept it, it would not succeed. What puzzles me is how the author got all these materials. He must have connections in high places to be able to get a lot of these materials. These materials should not be in archives, they should be in public domain so that we know the causes of our problems.

I pray that all Nigerians should rise up and say no if anybody seizes a radio station and says “fellow countrymen”. I hope that this book will find a way into all university libraries throughout this country, to all secondary school libraries and abroad. I appeal to the media to give this book a comprehensive and desired review. The more I open the book, the more I see something to talk about. This book is going to represent one of the chapters in the tragedy of Nigeria. This book is just like horror film because the instability which was started in 1966…….. because many of the coups are what I’ll call commercial coups.

If anything at all, we have to learn a great lesson from this book and also learn a lesson on what happened, who failed or succeeded in their coups. When it succeeds, they call it glorious revolution, but when it fails, it is called treason. It is my honor and privilege to present this great and historic book. One of the things I like about the book is the language of the author. He’s someone who speaks Englishman’s English. He writes Queens English. Very lucid, very flowing.