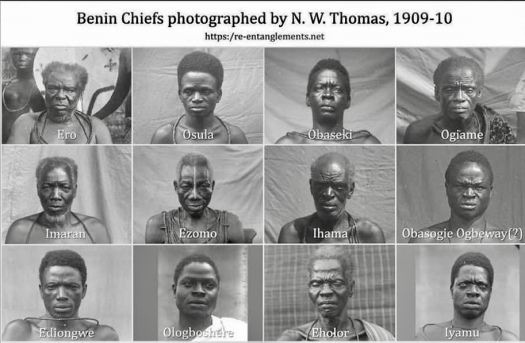 Chief Agho Ogbedeoyo the Obaseki Of Benin, acted as the Oba of Benin during the interregnum, 1897-1914 As Head of Administration when Oba Ovonramwen was exiled. He was the great great grand son of the Obi of Nsukwa, in the now Aniocha region of the Delta State of Nigeria. The first Obi of Nsukwa himself was the son of King Ehengbuda (about 1578 A.D). Chief Agho Obaseki was the last child of his father, Ogbeide. To understand Agho’s fortune in life, it is necessary to trace how he became connected and the important role he played at the royal house in Benin.It all began with his great grand father, Prince Emokhua N’Obo (the native doctor) who had a dispute with his brother over the accession to the throne of their father,Obi

of Nsukwa, during the time of King Akengbuda’s in about 1750 A.D. During King Akenghbuda’s reign, Prince Emokhua and his son, Osifo (Also known as Alias Oyoo) relocated to Isi, which is roughly 15 miles Southwest of Nsukwa. His departure from Nsukwa was a result of the bitter dispute with his brother over the throne of Nsukwa. In Isi, Prince Emokhua N’Obo subsequently settled down with his son, Osifo (Alias Oyoo) at the direction of King Akengbuda who was the supreme ruler of the entire Edo kingdom.

However, when King Akengbuda passed to beyond, after a very long reign, King Obanosa (named so, because of his long stay as the heir apparent) succeeded him, but did not last long on the throne. Upon the passing away of King Obanosa, there was a political struggle and intrigues played by key members of the house of Iwebo, the highest of the palace associations. Due to these political intrigues by some of the high ranking chiefs in the house of Iwebo, Prince Ogbebor the second son was crowned, instead of Prince Erediauwa, the rightful heir. Soon, Prince Erediauwa was declared a fugitive by his brother Ogbebor, who quickly consolidated power. Prince Erediauwa’s flee from his brother Ogbebor landed him in Isi. Upon arriving in Isi, Prince Erediauwa met Osifo Oyoo, who was very sympathetic to the young Prince Erediauwa plight, because of the same predicament that befell his father Prince Emokhua N’Obo years before. They quickly connected, without much hard sell or conviction.

Osifo Oyoo was not only sympathetic to Prince Erediauwa’s plight, but went out of his way to help the young Prince, including housing him and being a part of his strategist to win back his throne. Since it was dangerous and suicidal for Prince Erediauwa to remain in Edo land or for anyone to be seen helping the young Prince, with his brother Prince Ogbebor on the throne and in control of the Edo army, he sought refuge in Ewohimi, his mother’s home town. Osifo instead ordered his young son, Ogbeide to accompany Prince Erediauwa as a guard to Ewohimi and serve him, while he himself continued to reside in Isi to execute some of the strategies to get him back on the throne. It was in Isi, Ogie (son of the Ezomo of Benin and one of the Uzama chiefs) [Ref. 1] who also was also helping Prince Erediauwa met Osifo and they both coordinated their strategies.

When Prince Erediauwa finally defeated his brother Ogbebor, he was crowned and assumed the title King Osemwende. Chief Obaseki’s father, Ogbeide now a young man was rewarded with a lower chieftaincy title. Chief Ogbeide was highly trusted, having been with king Osemwende throughout his ordeal, without any waver of allegiance and was considered one of the members of the inner circle of King Osemwende. Although, Ogbeide started as Omada (the scepter bearer), the lowest rank in the palace, he nevertheless rose rapidly under King Osemwende’s reign. After King Osemwende passed to beyond, King Adolor ascended the throne in 1848 A.D. Chief Ogbeide was further rewarded and elevated in rank until he attained the position as the head of Ibiwe (one of the palace associations, the custodians of the Princes) and was titled the Inneh of Ibiwe. This later palace association is the third in rank to the other two associations, Iwebo and Iwegua and is divided into two, one headed by Chief Oshodi who is in charge of the King wives and harem and the other by the Inneh, who is charged with the raising of the heir apparent and princes. It was during Ogbeide’s role as the inneh of Ibiwe and being the custodian of the heir apparent, Agho his son became very close to Prince Idugbowa (later crowned King Ovonramwen in 1888).

When Ogbeide died, Agho still a young boy lived at different times with his elder brothers, Ozuwa and Ogbomo. When things did not work out well for him at his brother’s Ozuwa’s place, Agho finally relocated to Iguovionoba, where his brother Ogbomo was residing, which is about 35 miles from Benin City and also very close to his mother’s village Okha. However, his stay at Iguovionoba was short lived, because of a dispute with one of the high ranking elders there. When life became unbearable and under constant threat, he relocated back to Benin City and sought the help of Prince Idugbowa, his childhood friend. Once again, their friendship was rekindled and never to be broken. Agho now a young man lived with his friend, Prince Idugbowa and started trading in cash crops such as oil, timber and spices. He became successful and grew more powerful, because of the support he got from Prince Idugbowa.

His break came in 1888 A.D, when King Adolor passed to beyond without bestowing Prince Idugbowa with the Edaiken title, a coronation that confirms the heir apparent and erase all doubts as to who will be the next king. Agho realizing the intrigues that the high ranking chiefs in Iwebo and Iwegua were planning against Prince Idugbowa, he did not waste time and urged his friend to move straight to the palace to claim his rights [Ref. 2]. It was rumored King Ovoramwen was never made Edaiken, but fulfilled that rights only after the coronation. After King Ovoramwen was crowned, he rewarded Agho with a chieftaincy title. Also, King Ovoramwen did not trust the Iwegua chiefs, those directly in charge of his quarters, because of the role they played in his coronation and was also rumored he did not sleep in the Iwegua quarters for almost two years until his enemies were gotten rid off [Ref. 2]. Not to leave any stone un-turn, he created the title Obaseki and bestowed it on Agho and made #3 high ranking chief in the Iwegua house. Ordinarily, Chief Obaseki would have belonged to the Ibiwe, the palace association his father, Chief Ogbeide headed.

When King Ovonramwen passed to beyond in January 1914, King Eweka was crowned, but not without controversy, if not for the wise judgement of the British authorities, on the strong evidence of some Benin Chief sighting primogeniture law of Edoland the table would have turned in favour of Chief Agho Ogbedeoyo, the Obaseki Of Benin.

Later during King Eweka’s reign, the British authorities, however, broke with tradition by appointing Obaseki, the Iyase of Benin (Chief Adviser to the king) much to the dismay of the newly installed king Eweka II. Consequently a power struggle ensued between king Eweka II and Obaseki, the new Iyase of Benin. The Iyase overshadowed the king under the new British political dispensation. Agho became famous for having held two titles, Obaseki of Benin and Iyase of Benin (the prime minister of Edo Nation).

Obaseki embraced Christianity in 1917 and consequently stopped participating in palace rituals such as the opening of the New Yam Festival. Since yams could not be harvested without the Iyase participating, hard times followed and the British had to intervene. The king retorted that the festivities could not commence without the Iyase’s participation and the Iyase, in turn, countered that his new religion compelled his non participation. king Eweka II was thus forced to open the festiviities without the Iyase, humiliated by publicly apologizing to Obaseki, and in an act of reconciliation, the king gave his daughter, Princess Comfort Ebose, in 1918 to Obaseki in marriage. Obaseki now had as wives, the daughters of 2 successive kings (first Ovonramwen who married off Orinmwiame while in exile, and now Eweka II).

Obaseki suffered from Pneumonia and died on September 9, 1920. two years after marrying the king’s daughter, His sons are Wilson Aigbedo, Agboifo, Humphrey, and Gaius Ikuobasoyenmwen.