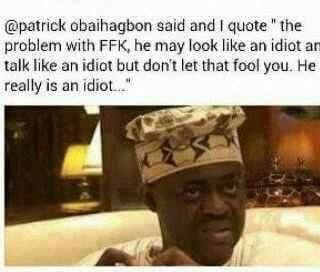 In recent times, there is a popular quote from OBJ “didn’t mind Fani he will dance and sing for whoever is feeding him”.

Fani-Kayode once let it be known that he had had Bianca Ojukwu while they studied in Cambridge England. Put to test, he put his tail between his legs and ran off.

The videos above shows the same thrust of question on who was sponsoring his press junkets and his repeated over the top replies.

He seeks to overwhelm his interviewer with his perceived station in life. He did the same thing to Rotimi Amaechi, when a political disagreement arose on Fani-Kayode’s stewardship of the aviation sector while minister of state.

He sees his kinship as a stick to beat those who he believes are at the end of his nose . For all his Anglo education and tone, he has has had nothing to add to out national development. He is crass and unproductive and unprofessional to state the least.

While his retort is the same, “do you know who I am” his contributions to his kinship is minimum. His legal education clearly is lost on him and his audiences.

The state of a nation is a commentary on its elite and the poor state of affairs of our nation is a poor return on the likes of the Fani-Kayodes for whom much was given and nothing was rendered from them.

One hopes our journalists will learn not to honour his self serving singing and dancing when next he is given food to eat.