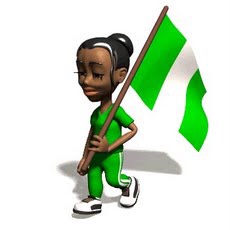 It was the first day of the session and a new direct entry student, Mensah, a Ghanaian, joined the class in one of Nigeria’s universities.

The Lecturer said, “let’s begin by reviewing some Nigerian history.” The Lecturer asked who said, “I shall return to die in the land of my fathers?” She saw a sea of blank faces, except for Mensah, who had his hand up. Mensah replied “King Jaja of Opobo, 1875” “very good!” said lecturer.

Then she asked again, who said, “The land use act will feed the nation?” Again, no response except from Mensah: “Obasanjo, 1976.”

The Lecturer snapped at the class; “class, you should be ashamed. Mensah, who is new to our Country, knows more about our history than you do.”

The Lecturer heard a loud whisper: “Ghana must go” “who said that?” she demanded, Mensah put his hand up, “Shagari 1983″

At that point, a student at the back scornfully said; “Hmmm, you think you are smart?” The Lecturer glared and asked; “All right! Now, who said that?” Again, Mensah said, “Babangida to Abiola, 1992.”

Now furious, another student yelled; “Oh yeah! Eat this!” Mensah jumped out of his chair waving his hand and shouting to the Lecturer, “Indian mistress giving an apple to Abacha, 1998”

Now, with almost mob hysteria, someone said; “You little shit. If you say anything else, I’ll kill you.” Mensah frantically yelled at the top of his voice; “Chris Uba to Ngige, 2004!”

The Lecturer fainted, and as the class gathered around her on the floor, someone said; “Oh shit, we’re in Big trouble now!” Mensah whispered; “Chimaroke Nnamani, Ayodele Fayose and Lucky Igbinedon 2007”

Someone angrily said; “Don’t answer him, he is a fool” Mensah smiled replied; “Obansanjo to IBB, 2011”

Now the Lecturer manage to get up and asks Mensah; “pls, who’re you? Show your self” Mensah jumped, yelled and said; Jonathan to BOKO HARAM 2012

One Reply to “Nigeria History through Quotations”