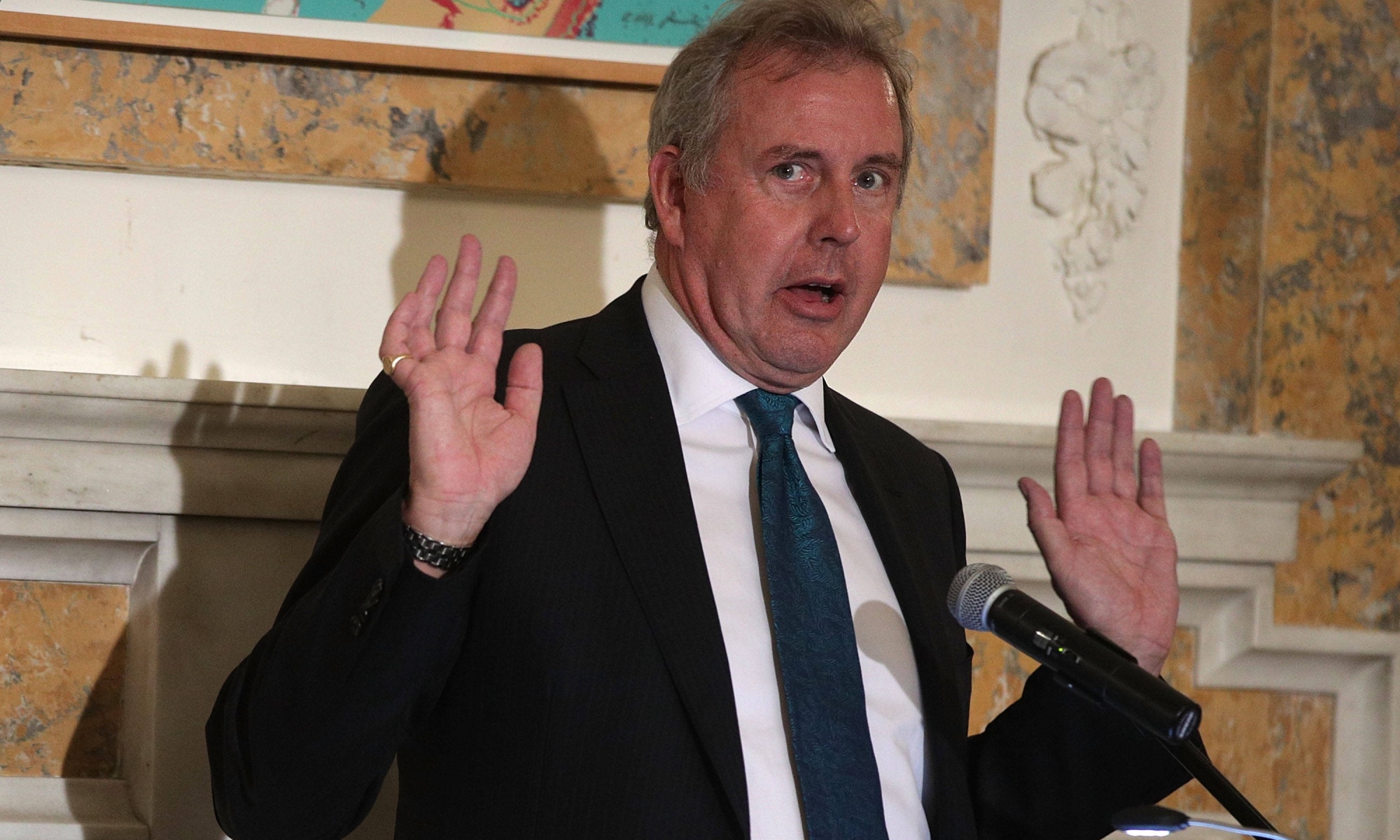 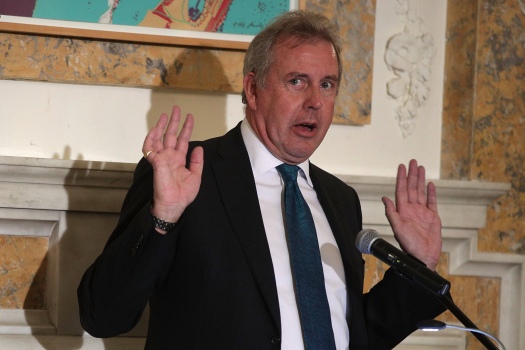 Kim Darroch speaks during an annual dinner of the National Economists Club at the British Embassy in Washington on Oct. 20, 2017. (Alex Wong/Getty Images)

Kim Darroch, Britain’s ambassador to the United States from 2016 to 2019, watched the Trump presidency unfold from one of the best seats in the house. Then the spotlight turned on him.

Last year, some unflattering memos about President Trump — calling him “inept” and “insecure” — leaked to the British press. The president dubbed Darroch a “pompous fool.” After a few days of insults and tweets, Darroch resigned.

More than a year later, he is back to tell his side of the story. His book, “Collateral Damage: Britain, America and Europe in the Age of Trump,” will publish on Oct. 13.

“I wanted it to be the opposite of score settling,” he said in a Zoom interview from London.

This interview has been edited for length and clarity.

Have your views on the leadership of Trump and British Prime Minister Boris Johnson changed much?

In the Untied States, you had a president who I think was quite confident of reelection on the back of what he would talk about as the strongest economy in history. In Britain, you had a prime minister coming into office with an 80-seat majority.

Then the pandemic comes along. Suddenly economies on both sides of the Atlantic are in ruins. Debt levels have spiraled. Unemployment is bound to rise massively.

The things that brought Trump to get elected and that prompted the British people to vote for Brexit haven’t changed. But Boris’s plans, which are quite radical for how he wants to change Britain, are now more difficult to deliver. Because where’s the money? Can you afford a “no deal” Brexit anymore?

Do you think Johnson’s government would prefer a Joe Biden or Trump presidency?

I think they were very confident, pre-pandemic, that Trump would win. A lot of their pieces were in the Trump places on the board.

Now Biden is consistently ahead in polls.

If a free-trade deal is the absolute priority for the U.K., then they might still think that Trump is a better option. But there may be a kind of slightly lazy assumption that Biden is a nice guy and he’s been around for a long time, generations of British politicians have known him and liked him, so it’ll all be fine.

Judging from my own relations and contacts with Democrats, that may be oversimplifying things. I can see the U.K.-U.S. deal slipping down the agenda [if Biden pushes to renegotiate the Trans-Pacific Partnership]. It could slip even further if Biden revives the idea of a U.S.-E.U. deal. I think his priority may be to restore and repair relations with Europe, to signal more solidarity with NATO.

Johnson called you after you resigned. Do you think he regretted his refusal, during his campaign to replace Theresa May as prime minister, to say whether he would keep you on as ambassador?

It was amicable, though I think you can say there was a tension underlining it. I don’t know that he had taken a decision. I think he was just not wanting to commit.

It would have been nice if he had been more supportive, but the reality is: He’s prime minister. He has a right to choose who he wants in Washington. But it was one of the factors that made me think, I’m going to get ahead of this story, I am going to resign. Honestly, I’m really glad I did.

Do you keep in touch with anyone from the White House? There was quite a bit of turnover.

I can imagine meeting with one or two of them when I am next in the United States — whenever that may be. You try to build relationships with people. For example, I got on extremely well with John Kelly when he was chief of staff. A year later, he’s gone. I think now they’re on the fourth national security adviser? I don’t know how many directors of communication there have been — maybe about seven?

One of the things you try to engineer as an ambassador is that each British cabinet minister who does anything which has external aspects to it, their best friend should be the U.S. counterpart. But you get to a place where you are reporting to ministers who say, “Can I come in to Washington and see my counterpart?” You’re saying, “Well, there’s a lot of stuff in the press that the president is not satisfied. You might want to hang on a bit.”

Johnson seems to get along with Trump. Can that last?

If Trump wins again, he has four years. Boris is not yet a year into his [five-year] term. So the two of them would be in power for quite some time together. I think the relationship would get pretty strong. Boris has great credibility in the Trump White House because he led Brexit.

All that said: the free-trade deal. I’m sure they’ll plow straight into it if they are in office and they will declare it the best deal ever once it’s done. But I do think the British government has been quite ambivalent on the whole issue of U.S. agriculture. I think they think they will probably have to accept a significant increase in imports of U.S. agricultural produce, but they don’t want to say that in public now.

In Trump’s Washington, would it have made sense for you to be less of a traditional diplomat and more of a bomb-thrower, like Richard Grenell, Trump’s ambassador in Germany from 2018 to 2020? 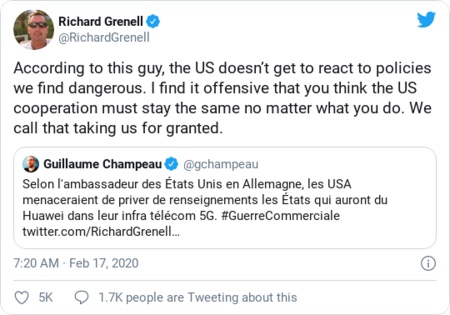 If so, you would’ve seen a political appointee follow me. And you didn’t. It’s clear that Boris wants a traditional diplomat in Washington, not a bomb-thrower. I don’t know, honestly, about everyone behaving like Richard Grenell. It would create something of a cacophony in most countries to have ambassadors do that sort of thing.

I would like them to be brought to justice because I think it likely to have a chilling effect for a long time to come on how diplomats conduct their business if someone gets away with this with no consequence. And yes, I would like to see them. Why? It’s not to smash my fist into them or anything like that.

It’s more than a year. Time softens and sort of heals. What really intrigues me is why they did it — and what they thought the consequences would be.