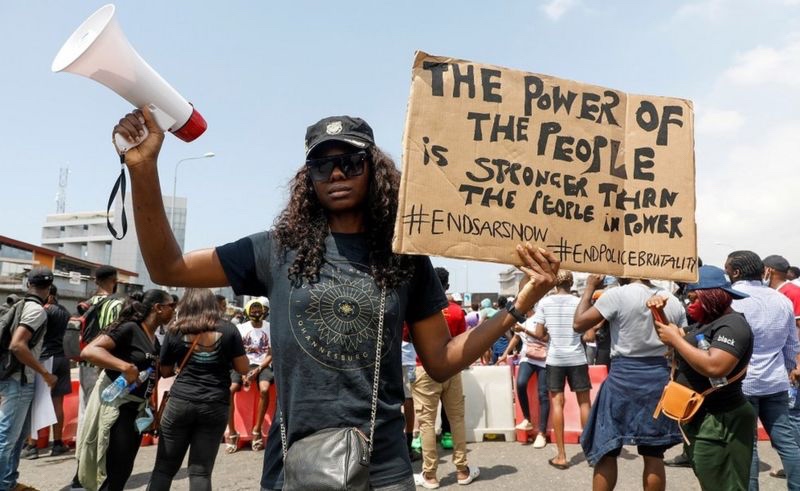 The hosts talk with Osai Ojigho about the importance of the African diaspora collectively taking a stand against police brutality worldwide.

While Americans are calling to defund the police in the United States, Nigerians are demanding an end to police corruption and violence through the global hashtag #ENDSARS. For nearly two weeks, protesters in the West African country have taken to the streets to fight for an end to the federal police force Special Anti-Robbery Squad (SARS) after a video emerged of officers allegedly killing a man.

Since demonstrations began, nearly a dozen protesters have been killed. Celebrities and activists including Cardi B, Drake and Burna Boy have posted on their social media accounts in solidarity with the #ENDSARS protesters. Though the global attention to this issue is new, Amnesty International Country Director Osai Ojigho told “And That’s That!” hosts Ja’han Jones, Taryn Finley and Shaquille Romblay that the call to end SARS has been going on for about five years.

“You get that feeling that we’ve been tolerating this for years, we’ve been complaining about it,” Ojigho said. “Everybody’s frustrated with COVID limitations, there’s an economic downturn in Nigeria. The young people are looking for jobs. Everybody’s kind of — this was just a tipping point. And we need to get it fixed right now because we don’t want to continue like this, with this sort of uncertainty and fear.”

Ojigho said that SARS mainly targeted young men between the ages of 17 and 30. She explained that Nigeria, which recently celebrated 60 years of independence, inherited colonial laws from the United Kingdom that were created to keep those colonized from dissenting. And despite military attempts to keep the police in check, internal structure eroded within the nation’s police forces, leading to blurred lines in regard to what their role entailed and creating a system of violence and bribery.

Head of the police Mohammed Adamu announced on Tuesday that SARS would be replaced with Special Weapons and Tactics (SWAT) and the new force would fill in the gaps left behind by SARS. Protests have continued, however, as a police rebranding doesn’t correct the brutality or hold officers accountable.

“It’s like you’re just replacing jam with jelly,” Ojigho said. “We want the government to own it and say, ‘Yes, we’ve heard that these units are notorious and we’ve shut it down. And all the officers, especially the commanding officers, have been summoned to face a panel. And these are the people that will be on the panel. These are the terms of reference.’ We’re not getting those concrete things.”