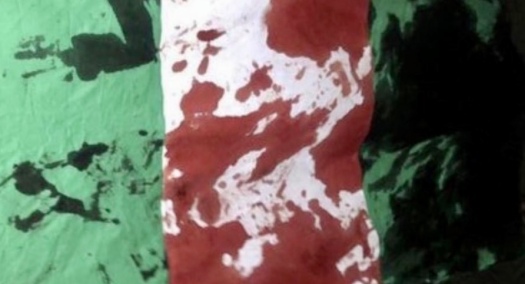 ON Tuesday, Nigerians watched in horror as the military created one of the most chilling images of brutality against peaceful protesters in Nigeria. The unmistakeable cold-blooded shooting of defenceless youths at the Lekki Tollgate in Lagos when soldiers callously opened fire on peaceful #EndSARS protesters has been greeted with outrage all over the world. Although there are conflicting reports of the death toll, many protesters suffered horrible injuries, according to some of the survivors and witnesses. The sprawling tollgate has been host to, and epicentre of a peaceful two-week-long protest by the youth demanding an end to police killings, harassment and brutality.

Media reports stated that soldiers shot at least seven protesters dead, but the Lagos State Governor, Babajide Sanwo-Olu, admitted that soldiers carried out the shooting. After declaring initially that no one was killed, he later reported one death. The Nigerian Army, however, unconvincingly denied involvement in the slaughter, insisting, “No soldiers were at the scene.” Global rights group, Amnesty International, claims that at least 12 protesters were killed at the Lekki tollgate plaza and at the Alausa areas of Lagos State, adding that like in previous killings, security agents hid some of the corpses of the protesters. Nobel laureate, Wole Soyinka, said the facts are indisputable – “…you, the military, opened fire on unarmed civilians.”

It was, indeed, one of the country’s darkest days under Major General Muhammadu Buhari (retd.)’s five-year-old regime. Reports say gunfire was heard throughout the night and till up the next morning. Unlike in the other centres where hoodlums took advantage of the protest to set ablaze public buildings and loot, the Lekki centre had been reported to be well organised and peaceful. It was reported that on Tuesday evening, the CCTV cameras at the tollgate were disconnected and later around 7pm, the floodlights and display boards were switched off, putting the entire area in total darkness. Still, scores of protesters remained adamant and refused to vacate the area.

The regime’s brutal crackdown on the peaceful protesters is particularly horrific. Though the activities of hoodlums who have taken advantage of the youth’s lawful protest in other places are condemnable, there cannot be any justification for the harsh, violent reaction of the Army to the #EndSARS peaceful protesters. It was pre-planned, premeditated murder, a treacherous, cold-hearted and callous massacre of innocent youths exercising their inalienable right to peaceful assembly. This follows exactly in the culture of intolerance where citizens are permanently denied the right to protest.

Buhari, the Chief of Army Staff, Tukur Buratai, all the officers and soldiers who perpetrated this heinous crime must be held accountable. There was no excuse for the deployment of soldiers. Unlike the hoodlums who had torched four police stations across the city, vandalised property and vehicles, the orderly youths massed at the Lekki Tollgate Plaza, were peaceful, ebullient, waved the Nigerian flag and sang the national anthem. But the soldiers and police officers came to kill. This qualifies as a crime against humanity.

Indeed, the Nigerian Army under Buratai and Buhari set the stage for the premeditated slaughter of the youth that Black Tuesday. Buratai had announced ‘Operation Crocodile Smile VI’ and deployed soldiers to the streets on the eve of the massacre. As this newspaper warned on Wednesday, this was unnecessary, and we had argued that the troubling move would only escalate the #EndSARS protests. On his part, Buhari gave a tacit agreement to the massacre by refusing to stop Buratai from deploying soldiers to the streets even as Boko Haram/ISWAP insurgents are running free in the North-East, where they massacred 14 people a few days ago. Against all entreaties by well-meaning Nigerians, Buhari has been playing the ostrich, refusing to take charge of the crisis that is threatening Nigeria’s very foundation. It shows that the President has lost control of his government, with his legendary proclivity for being missing in action at critical times while his foot soldiers run riot.

As the death toll mounts around the country, Nigeria has become an object of international ridicule, a place where civil protesters are shot wantonly. On Black Tuesday alone, about 49 people reportedly died in protests and killings by soldiers and the police, whose brutal repressions instigated #EndSARS in the first place. Political leaders, Hillary Clinton, Joe Biden, Kaycee Madu, the Archbishop of Canterbury, the UN Secretary-General, music stars Rihanna and Beyonce and footballer, Odion Ighalo, have all condemned the regime’s handling of the protests.

Those responsible must pay for the outrage. As Commander-in-Chief, Buhari bears primary responsibility. Buratai, who despite warnings to desist from his stated intention to “defend democracy” and threats to deploy troops, went ahead to do so, bears responsibility for this. So were the Lekki tollgate shooters. Serial judgements by the International Criminal Court have established that merely claiming to be obeying a superior’s orders does not shield a murderer, rapist or torturer from punishment. Those who gave the orders down the command chain must be identified and prosecuted.

Sanwo-Olu is also complicit in setting the stage for the massacre. His hasty, unrealistic imposition of a curfew from 4pm at such a short notice in a city where it takes up to six hours for some to commute from one point to another was patently rash. He needs to tell Nigerians who ordered the removal of the CCTV cameras and switching off of the floodlights at the plaza that cleared the way for the soldiers to murder under the cover of darkness.

The denial by the Nigerian Army that its personnel were not at Lekki nor fired the fatal shots flies in the face of evidence streamed in real time by eyewitnesses and by preliminary reports of Amnesty International, citing credible evidence. Buhari should order an independent investigation to unravel the truth. What kind of leaders would deliberately deploy soldiers to go and kill peaceful youths? We may all be in a collective quandary over how to respond to the Lekki tollgate massacre, but one fact will never go away: someone somewhere ordered that the tollgate should be cleared of protesters using all necessary force. Pat Utomi, a political economist, describes it as an “authoritarian capture of the Nigerian state.”

Such crimes are increasingly frowned upon by the international community. Ex-leaders, including Charles Taylor, Liberia;  Hissene Habre, Chad; the late Slobodan Milosevic, Serbia; Laurent Gbagbo, Ivory Coast, and Omar al-Bashir, Sudan, have been hauled before the ICC; those tyrants whose home judicial systems are too weak to call them to account can no longer hide forever.

In January 1953, American President  Harry Truman, explaining the  sign “The Buck Stops Here” said, “The President – whoever he is – has to decide. He can’t pass the buck to anybody. No one else can do the deciding for him. That’s his job.” At the end of it all, the buck stops at Buhari’s desk. And the outcome of a protest will be either violent or peaceful depending on government response, another one time US president, John Kennedy, once admonished. He said, “Those who do nothing invite shame and violence. Those who act boldly recognise right as well as reality.” Buhari should make his choice.

This is the time for all Nigerians, leaders, elders and all groups to stand for human rights and justice. Tolerance of state impunity for so long has weakened civil engagement and democratic institutions. Black Tuesday will not be forgotten. It will be remembered because it was a day peaceful protesting youths were slaughtered at Lekki tollgate while holding the Nigerian national flag and singing the national anthem.