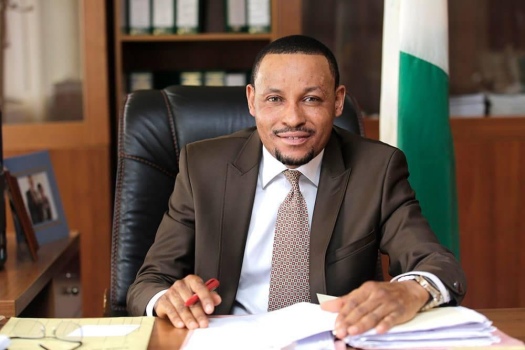 The usage of “BIAFRAN Boys” in the statement issued by the chairman of the Code of Conduct Tribunal, Danladi Umar, following the viral video, where he was caught on camera physically assaulting a security guard at a plaza in Abuja, has sparked outrage on social media platform, Twitter.

The statement which had been signed by his spokesman, Ibraheem Al-Hassan, not only had grammatical errors, the statement also said the crowd that had gathered at the scene of the assault consisted of “BIAFRAN boys.”

Part of the statement read, “As the few policemen in the complex were apparently overwhelmed by the mobs, consisting of BIAFRAN boys throwing matches and shape object to his car, which led to deep cut and dislocation in one of his finger, causing damage to his car, smashing his windscreen.

“At a point he attempted to leave the scene, these same miscreants, BIAFRAN boy ordered for the closure of the gate thereby assaulting him before the arrival of police team from Maitama police station.”(sic).

Twitter users have been reacting to the labeling of those who gathered as people from the south eastern part of Nigeria as Biafran boys.

Popular Twitter user, Sam Hart, fondly called Dede said, “Biafran Boys. At a business premises in Abuja. By a Senior Government Official. In an Official Press Release. If this is allowed to slide, we will know.”

FS Yusuf said, “I love the protuberant prejudicial profiling and ethnic-baiting in this grammatical challenged trash. “BIAFRAN Boys.” We are gradually splitting this country by our very own hands.”

Mazi Tochukwu tweeted, “The word “BIAFRAN Boys” from an official of Fed Rep of Nigeria has proven my argument that Igbo people have been at war with Nigeria for 54 years now. Nigeria is still fighting Biafrans till today and tomorrow. All the detribalised Igbos but Okpo, you’ve been put in your place.”