President seen as an agent of change in 2015, but an ineffective time in office has left him exposed to challenger.

Returning to Nigeria after a long sick leave in London last year, President Muhammadu Buhari was greeted with a bizarre conspiracy theory.

He had died and been replaced by “Jubril from Sudan”, a body double who had undergone extensive plastic surgery, said the Biafran secessionist leader Nnamdi Kanu.

In October, just before campaigning began for February’s presidential election, the rumour went viral. For weeks now, prospective voters have been squinting at before-and-after pictures of the president’s hands and ears, trying to spot the difference – so much so that the normally-tightlipped Buhari has felt the need to deny the rumours.

“It’s the real me, I assure you,” he told an audience in Poland on Sunday, chuckling.

But truth is as curious as fiction in an election that pits the incumbent, Buhari, against a record 78 other candidates, including a former vice-president, Atiku Abubakar, a former minister and Chibok girls activist, Oby Ezekwesili, and a former state governor, Donald Duke.

Buhari, a former military dictator with a reputation for hard discipline, swept to power in 2015 for the All Progressives Congress party on a wave of disgust at levels of corruption under Goodluck Jonathan’s administration and fears about the growing power of the extremist group Boko Haram.

As his term reaches a close he stands accused of failing to effectively deal with either, squandering the goodwill he enjoyed at first by taking six months to appoint a cabinet and spending another five on medical leave for an unknown illness in London.

Despite the military’s attempts to portray the country’s north-east as safe, Boko Haram is still launching deadly attacks on villages and military bases. More than 100 soldiers were killed at a single base between 18 and 20 November, and the force mandated to fight the group has just been appointed its fifth commander in two years. Meanwhile, thousands of people have died this year in escalating herder-farmer violence. 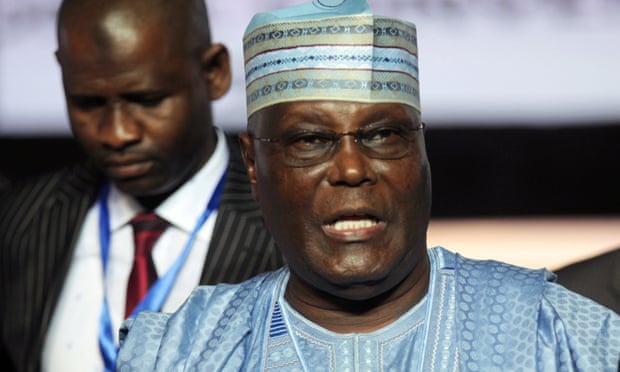 But perhaps the biggest difficulty for Buhari has been the economy, which is struggling to recover from a recession that ended a year ago. More than 10 million young people are unemployed, and Nigerians are finding it increasingly difficult to make ends meet.

Atiku, the People’s Democratic party (PDP) candidate, is presenting himself as the solution, promising to lift 50 million Nigerians out of poverty and create 3m jobs a year. He has said he would let states that produce oil keep more of the export revenues and privatise the debt-ridden state oil company.

Buhari said recently: “Elections should not be a declaration of war; rather cement our brotherliness and nationhood.” For 40 of the 55 years that Africa’s “crippled giant” has been free of colonialism, however, it has been ruled by generals or former generals, of whom Buhari is the latest. To be elected president of Nigeria, it helps to have a military uniform in your closet.

Atiku is a businessman, not a military man, but he appears to have something just as good: the generals. These are a powerful bloc of three former military heads of state, along with a former national security adviser and chief of army staff, who have had a hand in the rise of most of the country’s elected presidents in modern times, including Buhari’s in 2015. In the run-up to next year’s election, they seem to have switched sides.

One of the generals, Ibrahim Babangida, who dispatched Buhari in a palace coup in 1985 and endorsed him as a civilian president in 2015, has recently voiced his displeasure with the incumbent. Another, Aliyu Gusau, who as Babangida’s military intelligence chief played a major role in hatching Buhari’s first exit, surfaced at the national convention of Atiku’ PDP.

But it seemed impossible that the most famous of them, the charismatic, outspoken Olusegun Obasanjo, would ever support his former deputy. Every Nigerian knows the story of Obasanjo, a four-star general and the then president, going down on his knees to Atiku to beg him for a second term 15 years ago, an extraordinary act of self-abasement.

In exchange, Atiku, who had been promised the ticket after Obasanjo had served one term, gave up his presidential ambition for the 2003 election, clearing the way for his boss to run again – and win.

Atiku’s humiliation of the general seemed still to smart just a few months ago. “If I support Atiku for anything, God will not forgive me,” Obasanjo said in August. However, two months later Obasanjo endorsed him, singing his former nemesis’s praises.

Even with this internationally respected elder statesman on side, the election is far from decided in Atiku’s favour. Claims that he stole government money, while unproven, have tarnished his reputation, and the US government has reportedly placed Atiku on a travel ban list, even though it says it has no case against him.

“With all respect to the former vice-president [Atiku], I don’t think he will be able to escape the conversation around corruption,” said Rotimi Amaechi, Buhari’s campaign manager and the transport minister. “I agree with Nigerians who say ‘we need food’; they don’t want to discuss corruption. But the reason they don’t have food is that the money that we’d use to buy food for them has been stolen.”

Buhari, arguably the country’s most popular northern Nigerian in decades, hails from Katsina in the north-west, which has the largest number of registered voters nationwide.

The north-west and south-west remain the swing zones, as in 2015. Key to Buhari’s victory then was the commercial hub of Kano, in the north-west, where he won 90% of the vote. However, the political machinery that generated that victory is now in chaos.

Kano’s former governor Rabiu Kwankwaso moved from the ruling APC to the PDP this year with a large crowd of his followers. His successor, Umar Ganduje, has been enmeshed in a race to save his own seat after he was filmed stuffing an alleged $5m (£3.9m) bribe from a contractor into the folds of his white robes (federal ministers said the videos were fake). A few days later Ganduje was smiling and shaking Buhari’s hand at the presidential villa, jeopardising the president’s austere image.

Many accept Buhari’s argument that he needs more time to sort out a rotten system. Many others think Atiku’s promises to get Nigerians – and their economy – working again are credible.

For many, the palace intrigue in Abuja distracts from the spiralling violence and extreme poverty in which millions are living, and many Nigerians are bracing for electoral violence and rigging.

“It’s crazy that we can say we know Atiku is popular enough to win, he has enough political savvy to win, but we do not know that they will not rig the elections,” said Demola Olarewaju, a political analyst allied with the PDP. “Everybody keeps saying ‘if’ they allow free and fair elections. That should not be. Having said that, I think it’s up to Nigerians to ensure that our interests are protected. The ordinary guys. That’s your best defence.”