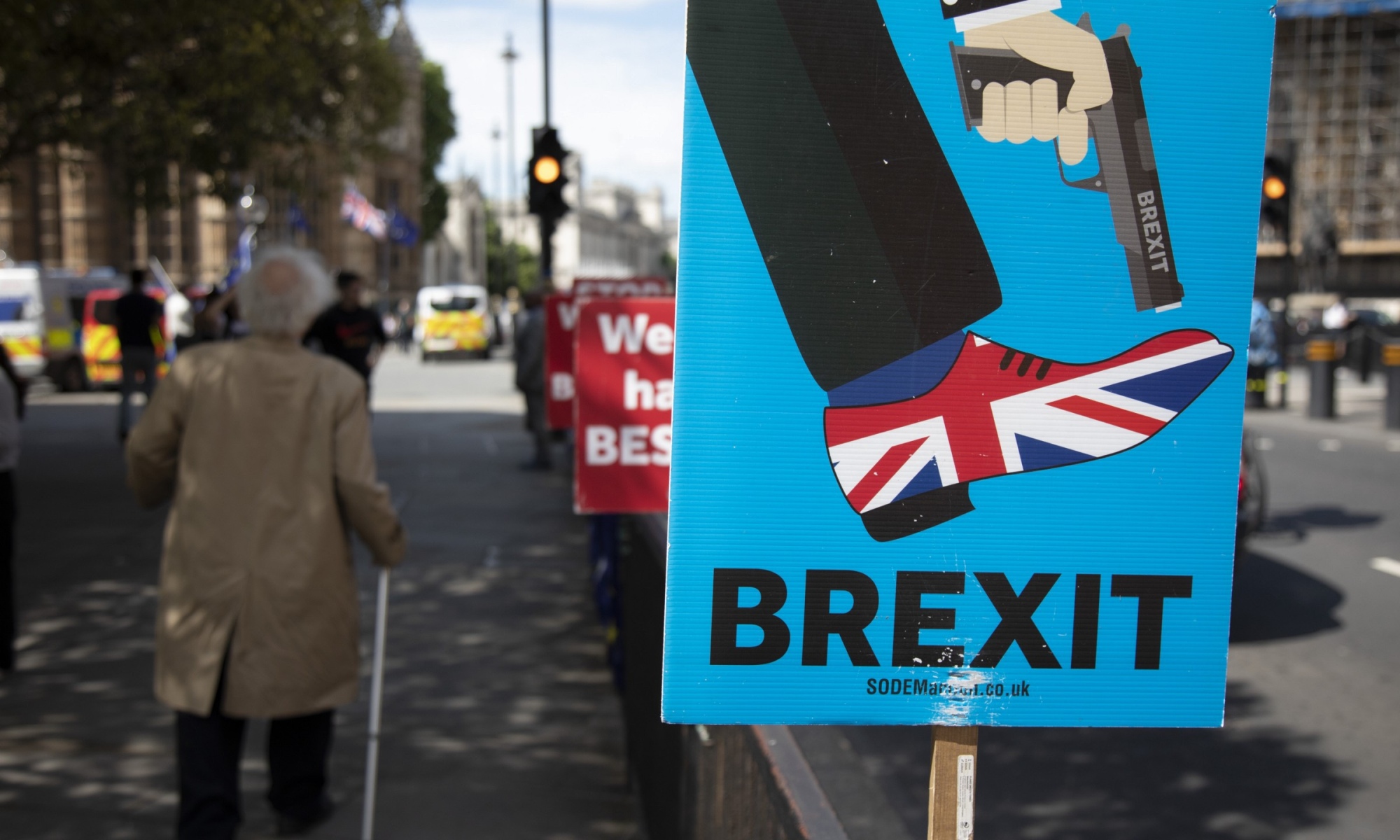 In recent days certain government backbenchers have proposed a new avenue to deliver a “no deal” Brexit. As Sir Edward Leigh put it:

“There are only two choices given the EU won’t change the deal and there’s no chance of parliament passing it. One is cancel Brexit: an intolerable denial of democracy. The other is leave without a deal on WTO terms on 31 October. But MPs, assisted by the Speaker, will block this. Solution: End this failed session immediately within a few hours of a new government and prorogue Parliament. Leave the EU on 31 October…”

While several Conservative leadership candidates have disavowed this course of action, Dominic Raab, one of the front runners, appears to have declined the opportunity to do so. It further appears that Andrea Leadsom, whilst Leader of the Commons, explored the implications of taking a similar course of action. The Speaker, John Bercow, has stated that he will not permit Parliament to be prorogued in such a way. Prorogation, however, is within the gift of the Monarch, not the Speaker. It is not clear what would happen if the Queen prorogued Parliament and the Speaker refused to be prorogued but it is certain that it would create a constitutional crisis.

Could such a crisis be worked out in the courts? The power to prorogue Parliament falls within the royal prerogative. This power was expressly preserved by section 6(1) of the Fixed Term Parliaments Act 2011. As established in Council of Civil Service Unions v Minister for the Civil Service [1984] UKHL 6 (“the GCHQ Case”), The prerogative is, with certain exceptions, subject to judicial review. As established in Bancoult (No. 2) [2008] UKHL 61, the same principles generally apply to a review of prerogative power as apply to the review of other government powers. Certain prerogative powers are, however, excluded from review. It is generally understood that these include matters of pure international law, the Royal Assent, and the use of “personal” prerogative powers. This third class includes the power to prorogue Parliament.

Does this make the “Brexit through prorogation” plan immune from judicial review? Not necessarily. Two avenues may be successful. First, as they did in R (Miller) v Secretary of State for Exiting the European Union [2017] UKSC 5 (pdf), the courts may determine the scope of the prerogative power even where that power is one of those excluded from the traditional principles of judicial review. The courts may determine that to prorogue Parliament so as to prevent Parliament from exercising control over Brexit is outside the scope of the prerogative power (the substantive reasons for this are set out below). Further, it was stated by the majority in Miller that the court could not accept that ‘a major change to UK constitutional arrangements can be achieved by ministers alone’. Parliament should be consulted on significant constitutional changes. Given that, by effect of Article 50, the UK will automatically leave the EU on 31 October, the government’s failure to stop it will create a substantial constitutional change by default. I do not think this argument is as strong in this case as it was in Miller, however, because it begs the obvious response that Parliament sanctioned the serving of a notice under Article 50 in the European Union (Notification of Withdrawal) Act 2017 in the full knowledge of the effect of Article 50. There has not been any subsequent Act of Parliament suggesting that the position has changed on that point.

What of the substantive grounds for review? It is almost certainly beyond the power of the Prime Minster to advise the Queen to prorogue Parliament in order to frustrate the will of that same Parliament. It is also arguably outside the scope of the Queen’s prerogative power to exercise it so as to frustrate the will of Parliament. As the House of Lords held in R (Fire Brigades Union et al) v Secretary of State for the Home Department [1995] 2 A.C. 513 (albeit in the case of a clear statutory steer from parliament), the executive is not permitted to use prerogative powers to frustrate the will of Parliament. Both Houses of Parliament have expressed the view that a “no deal” Brexit should not be permitted. Parliament has exercised control over the process of Brexit so as to ensure a “no deal” Brexit is avoided. It will likely seek to do so again in October. The act of advising the Queen to prorogue Parliament before (and across) 31 October would have the effect of excluding Parliament from the Brexit process.

Parliament’s democratic mandate is fundamental to the UK constitution. In Sir Jeffrey Jowell QC’s words, Parliamentary sovereignty “is the stone upon which our Constitution is not writ”. The government holds office because it is able to command a majority in the House of Commons. The Commons hold office because they hold a mandate from those they represent. Legitimacy flows upwards from the electorate. As Lord Hope of Craighead put it in Jackson v Attorney General [2005] UKHL 56 (pdf) at 126:

“It must never be forgotten that this rule [of recognition] … depends upon the legislature maintaining the trust of the electorate. In a democracy the need of the elected members to maintain this trust is a vitally important safeguard. The principle of parliamentary sovereignty… is built upon the assumption that Parliament represents the people whom it exists to serve.”

In the light of this, it seems absurd to suggest that the Prime Minister has the power to advise the Queen to take an action that would exclude Parliament from expressing its view (and potentially exercising its power to control the actions of the government) in relation to the most significant constitutional matter in a generation. Similarly, given the democratic basis of the constitution, and parliament’s fundamental position in that, it seems very difficult to argue that the Queen’s prerogative power extends to proroguing Parliament so as to silence Parliament in relation to a major constitutional issue.

It may be argued that, although Parliament has, in the past, indicated that it opposes a “no deal” Brexit, it is not for the courts to read such an intention into the future. In the European Union (Withdrawal) (No. 5) Act 2019 Parliament, in effect, ordered the Prime Minister to seek an extension to the Article 50 TFEU process so as to avoid a “no deal” Brexit on 12 April. Similarly, various motions all related to 29 March or 12 April. The order in the 2019 Act only mandated a single action.  It might be argued that, while Parliament ruled out a “no deal” Brexit in April, it has not done so indefinitely. The statements of various MPs do not carry the same weight as an Act of Parliament. Indeed, as Maddy Thimont Jack has pointed out, at the Institute for Government, it is not clear that Parliament will be able to take the same approach to a “no deal” Brexit in October as it took in March and April.

Such an argument, however, seems rather semantic. The core of the issue is the exclusion of Parliament from a matter of historic constitutional importance. The harm at which a review would take aim is not simply the frustration of Parliament’s will, but the fact that Parliament will be prevented from establishing a position at all.

The act of advising the Queen to prorogue Parliament would also, likely, be reviewable on the “bad faith” ground. The Prime Minister has a duty to exercise her powers in good faith (see R(C) v Secretary of State for Health [2000] 1 FCR 471 at 23). Advising the Queen to prorogue Parliament so to prevent it from frustrating the Prime Minister’s agenda cannot possibly be considered a good faith exercise of the power. There may be other grounds for review, but these seem to be the leading contenders.

A review such as this would undoubtedly push the boundaries of constitutional law. It must tease out numerous technical and principle issues (I have not begun to discuss the proper remedy, for example). It would, however, be an appropriate response to an extraordinary constitutional moment. It is, indeed, in the heat of such moments that the UK’s evolutionary constitution is forged.