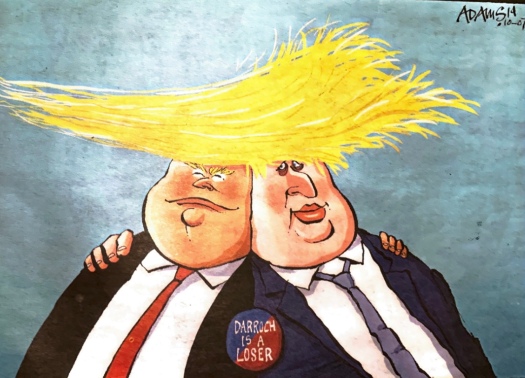 Britain has a new prime minister, and President Trump approves. “He’s tough and he’s smart,” Trump said of Boris Johnson. “They call him ‘Britain Trump.’ And people are saying, ‘That’s a good thing.’ They like me over there.” In fact, according to YouGov, only 21 percent of Britons have a favorable view of Trump, and 67 percent have a negative view. (Barack Obama has a 72 percent favorability rating.) But the bigger issue is that Johnson’s rise to 10 Downing Street is bad for Britain, for Europe and for the United States.

Johnson has assured the House of Commons that Britain will be out of the European Union in fewer than 100 days. How he can manage this sweeping withdrawal without sharp dislocations to the British economy remains a mystery. (Almost half of Britain’s exports go to the E.U.) But it is clear that were Brexit to happen, it would accelerate the decline of Europe as a global actor.

Britain has always been an organizing force in Europe. When U.S. Secretary of State George Marshall announced a plan to help Europe rebuild after World War II, it was the British government that took the lead in responding and forging a coalition of countries that ultimately accepted the Marshall Plan and worked with the United States to make it a success. London also took the lead in organizing the coalition that became NATO, including the controversial decision to welcome Germany into the alliance in 1955.

Britain took a while to enter the European Economic Community, but once it joined in 1973, it became perhaps its most influential member. What is often forgotten in all the talk of the European Union’s rules and regulations is that its central project for decades was the creation of a single market, harmonizing taxes and eliminating tariffs and barriers. That vision was articulated and urged most aggressively by Britain’s free-market prime minister, Margaret Thatcher. And the plan succeeded in large measure.

Britain also consistently advocated a Europe of nation-states, not a European super-state. And despite some recent rhetoric to the contrary, that is basically what exists. Brussels has a budget of about $185 billion a year. With a gross domestic product that is roughly comparable to the European Union’s, the United States spends more than $4 trillion. As for bureaucrats, former deputy prime minister Nick Clegg once observed that the British county of Derbyshire had about as many bureaucrats as Brussels. “Some super-state!” he said.

And to the extent that there was a movement among some European leaders to create a more centralized and unified Europe, that project has largely collapsed. Princeton’s Jan-Werner Müller contends that it has been replaced by “Breurope,” a conception of the E.U. that is much closer to the one articulated by London. Müller points out the irony that Britain wants to exit Europe at the moment that its vision for Europe has won the day.

Former U.S. ambassador to the E.U. Stuart E. Eizenstat said Britain was always the United States’ closest ally on substantive issues within Europe. He wrote in a blog post for the Atlantic Council: “With Brexit, the United States would lose a major supporter on a range of important trade and regulatory issues, where the UK’s more free-market approach mirrored ours more closely than most EU member states; on US sanctions regimes against Iran, Russia, and other countries; on data privacy and anti-trust matters; on counterterrorism . . . and on national security issues.”

Britain is poised to withdraw from Europe at a time when Europe is withdrawing from the world. Past leaders such as Thatcher, François Mitterrand, Jacques Delors and Helmut Kohl all believed that Europe had to play a pivotal role in global affairs. They and their successors built the single market, navigated the collapse of the Soviet empire, welcomed in the countries of Eastern and Central Europe, and projected Western values onto the new post-Cold War world.

Today, European leaders are consumed with Europe’s economic strains, populist politics and anti-European backlashes. Germany’s Angela Merkel is in caretaker mode. France’s Emmanuel Macron wants a stronger Europe but is bedeviled by domestic troubles. And Britain, long the voice for energy and activism on the world stage, is busy preparing for its exit.

The main challenge to global stability and order is obvious. It is the assertiveness of powers such as Russia and China. In such a world, Europe, which has an economy second only to that of the United States, could play a crucial role in helping to preserve the rules, norms and values that have been built up since 1945. But Europe would need to harness its power and act with purpose. In fact, it is moving in the opposite direction. We are watching the shriveling of a group of nations that have defined and dominated the international stage since the 17th century. Brexit will only accelerate this sad slide.