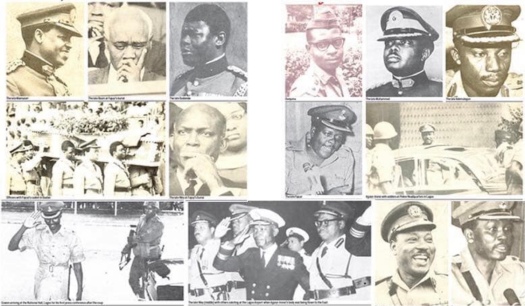 Fifty three years ago, “Five Majors” and a group of subalterns predominantly of Igbo or eastern extraction struck with Nigeria’s first coup and by the time their guns were silent, several prominent politicians and military officers of Northern, Hausa and or Fulani origin lay dead murdered in cold blood, including:

Due to the ethnic origin of the “five majors”, the coup was generally perceived as an Igbo coup and viewed as a conspiracy by the Igbo to seize power and dominate the federal government aided by the seemingly selective nature of the killings because no prominent eastern politician or military leader was killed.

As events were unfolding reports about the way Sir Ahmadu Bello, the Northern Region Premier and spiritual leader of the Muslim North, was shot in front of his wives filtered to the masses, fueling the thirst for vengeance and they need to stop the Igbo.

It did not help that Major General Ironsi, an Igbo became Head of state and his field promotions of some Igbo officers to command positions in the Army where viewed as further proof of Igbo plans to dominate the military as well. That, followed by the promulgation of Unification Decree 34 which centralized federal control was the seen as the conclusion of these plans and the last straw.

Eventually the need for vengeance gravitated under the leadership of Major Murtala Mohammed, a firebrand Northern extremist, who was very vehement about the North’s anger at the killings at military meetings to reduce disquiet amongst the troops by the Ironsi administration, but he was not brought to heel as the regime was still trying to placate the military, in the interim plans to avenge continued clandestinely.

The Nigerian Army had its origins in the North from the old colonial West African frontier force and most of the Junior Officers and enlisted men were of ethnic northern Muslim origin. They did not take the killings of their charismatic commanders like Maimalari lightly and the primary motivation of many soldiers was to avenge the deaths of their military leaders and restore the old status quo.

On July 29, 1966, the Northern counter offensive, Operation Aure, to regain power was launched and “Within three days of the July outbreak, every Igbo soldier serving in the army outside the East was dead, imprisoned or fleeing eastward for his life”, observed Professor Ruth First in The Barrel of a Gun: The Politics of Coups d’états in Africa [Allen Lane The Penguin Press, London, 1970, p317.].

Northern soldiers systematically and savagely executed Igbo soldiers across all the major commands in the Nigerian Army particularly Zaria, Kaduna and Kano were most of the army establishments were located. Some soldiers like Major Okafor, former commander of the federal guards was marched out of Gboko prisons and buried alive. Other officers were executed in officer messes and others were called out from parades or through rouses, and executed.

Search parties were conducted to find Igbo officers and many were intercepted at the Makurdi bridge rail link and shot, their bodies were tossed into River Benue.

Following the coup, the pent-up fury of northern civilians against many easterners in their midst exploded and riots and mass lynching’s broke out targeting many easterners who were set ablaze forcing thousands to flee back to the Igbo homeland.

The combined killings by the Northern controlled military and mobs in the north was the prelude to the Nigerian Civil war led by the Northern Officer command against the beleaguered Igbo people in the east manned by former officers of the Nigerian Army who escaped eastward.

This disproportionate response, especially the execution of these Igbo soldiers who had nothing to do with the first coup has never been fully addressed or appreciated by the public or the planners of Operation Aure and the Nigerian Army and the North has remained silent about the issue.

Similarly, none of these victims were given military funerals, except for a few like Ironsi, as some of their corpses were never recovered or fully identified.

Besides some of the senior officers, families did not receive any official communication informing them of the death of these soldiers and no spirited efforts have been made to pay any pensions or gratuities to their surviving kit and kin.

No tribunals or board of inquiries have been instituted to give a full accounting or to bring the officers and men who committed these murders to a court of military justice either, and the Oputa Commission skirted around the Revenge coup.

Similarly, none of the five majors or subalterns who launched Nigeria’s first coup were brought before a court of military justice, but they all were either killed, or died and were dismissed without pensions from the Nigerian Army while the ring leaders of Operation Aure, the bloodiest coup in Nigeria’s history, went on to the pinnacle of military and political power.

With the passage of time, faded memories, retirements and deaths it is unlikely justice will be served, but there is still time to bring all the perpetuators of the first and revenge coup to justice as some are still alive today.