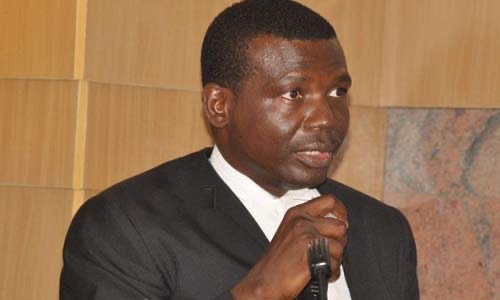 A human rights lawyer and Senior Advocate of Nigeria (SAN), Mr. Ebun-Olu Adegboruwa has responded to the Attorney-General of the Federation, Abubakar Malami, SAN and Femi Adesina and given reasons “WHY THE QUARANTINE ACT OF 1926 CANNOT LEGALIZE RESTRICTION OF MOVEMENT BY THE PRESIDENT”

In a statement made available to TheNigeriaLawyer (TNL), Adegboruwa, SAN said “1. The Quarantine Act has no provision for the restriction of the movement of any citizen. A fundamental right expressly granted by the Constitution cannot be taken away by assumption, inference or deductions.

” 2. Section 41 (1) of the 1999 Constitution expressly donates freedom of movement to all citizens and it cannot be taken away by way of executive proclamations or regulations, as an executive regulation cannot in law take away a fundamental right granted by the Constitution.

“3. The Quarantine Act of 1926, as its name and provisions connote, is meant for the isolation, care and treatment of victims of infectious diseases simpliciter, for the purpose of isolating them away from interacting with other members of the public, generally. A law enacted for the benefit of those not infected by any disease cannot and should not be twisted to restrain them.”

On the scope and origin of the Quarantine Act, the learned silk said

“The practice of QUARANTINE evolved in or about 1423 in Venice, which had a quarantine station on an island to check the growth of diseases brought by ships, by isolating and detaining ships containing persons or animals suspected of having or carrying a dangerous communicable disease. To this end, ships arriving in Venice from infected ports were required to sit at anchor for 40 days before landing. Quarantine is thus derived from the Italian words quaranta gioni, which means 40 days.

Adegboruwa therefore argued “THE MANIFEST ILLEGALITY OF THE REGULATIONS MADE BY THE PRESIDENT” by saying that “For the President to be entitled to make any regulation under sections 4 and 8 of the Quarantine Act, he must have complied with the conditions precedent laid down in sections 2 and 3 of the said Act, namely that:

(i) the President must first make a DECLARATION of an infectious disease, by a notice duly published in the Official Gazette, stating such to be an infectious disease within the meaning of the Quarantine Act. That has not been done, making the regulation made by the President to be inchoate and premature. For instance, in the first subsidiary legislation contained in the Schedule to the Quarantine Act, a declaration was made concerning Sleeping Sickness, to be a dangerous disease within the meaning of the Act.

(ii) in addition to the above, the President must also make another declaration, by notice in the Official Gazette, stating the particular place affected as an Infected Local Area and such must be a well-defined area, such as a local government, a town or a community, and not just a blanket tag. This has not been done. How then do we lockdown citizens and detain them forcefully for two weeks, in one single spot, without any charge or offence alleged against them?”

The statement reads in part:

“4. The conditions for interfering with the fundamental right of movement are as stated in section 41 of the Constitution itself or in section 45 (1) thereof, the latter prescribing a “…. a LAW (not regulation or presidential broadcast) that is reasonably justifiable in a democratic society.” The President cannot by mere executive regulation, take away the freedom of movement, expressly granted under the Constitution. In any event, the regulations anticipated under sections 4 and 8 of the Quarantine Act are limited to those infected with infectious diseases for the purpose of their guarantine.

“5. There is nowhere in sections 4 or 8 of the Quarantine Act that it is stated or anticipated that the President or Governor could make regulations for the restriction of movement of persons on account of infectious diseases, against persons not so infected. Regulations in relation to quarantine are always LIMITED to the infected persons.

“6. Laws purporting to infringe upon or derogate from the fundamental rights of citizens must be express, explicit, unambiguous and not subject to personal considerations and permutations, to prevent abuse. The Quarantine Act does not contain any provision expressly authorizing the restriction of movement of citizens and such power must not and cannot be assumed by the President.

“7. For the President to seek to restrict the movement of citizens, he must act under a law that EXPRESSLY permits him to so do, not by IMPLICATION, as he has purported to do under the Quarantine Act. In a proper federation, it is inappropriate for a President to take over the affairs of any State within the federation, without the input of the governor and the House of Assembly of that State. In Lagos State, the Governor had already introduced measures to curtail the spread of COVID 19, without violating the right to freedom of movement. In Ogun State, the Governor eventually postponed the President’s proclamation to April 3, 2020, on the ground that the people of the State were not prepared for the lockdown, whereas Mr. Femi Adesina claimed that it took effect from March 30, 2020. In another breadth, the Honourable Minister of Finance later claimed to have secured approval to exclude certain financial transactions from the lockdown. There should have been meaningful consultations before the President’s proclamation.

“8. Section 305 (3) (d) of the Constitution permits the President to declare a state of emergency in any part of Nigeria through an instrument published in the official gazette when “there is an occurrence or imminent danger, or the occurrence of any disaster or natural calamity, affecting the community or a section of the community.” The COVID 19 pandemic qualifies an imminent danger, a disaster and a natural calamity. The President should have explored this window for his declaration.

“10. We cannot take away the fundamental rights of citizens through executive proclamations made on the altar of some exigency or self-induced necessity, as the President had enough time since COVID 19 broke out, to have taken all reasonable steps within the law, to address it.”

Adegboruwa, SAN said he is “not opposed to the steps taken by the President and some Governors, to address the COVID 19 pandemic. I align myself totally with these measures for the safeguard of citizens; however, my primary concern is not to resort to a violation of the Constitution under the guise of exigency, as that could well be a dangerous signal for perpetrating illegality, even in the time of peace.

“It gladdens my heart greatly, that the Honourable Attorney-General of the Federation and my Learned Brother Silk, Mr. Abubakar Malami, SAN, is making very copious references to international protocols to support the breach of the fundamental rights of citizens, hoping well that when we seek to rely on these same protocols to enforce fundamental rights in future, they will not become foreign laws of western nations.”

He therefore “humbly urge the President to do the needful by approaching the National Assembly and the States concerned, to harmonize his actions with the laws of our land, failing which all lovers of the rule of law should brace up to challenge this constitutional breach in court, when we have been fully delivered from the compulsory lockdown.”