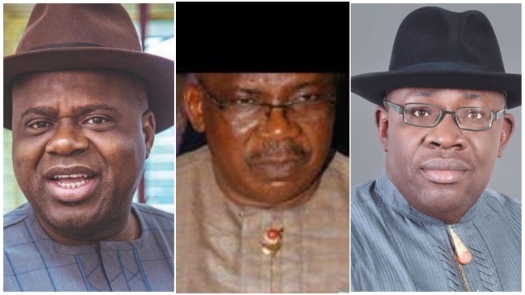 • The increasing government Debt burden and underdevelopment of Bayelsa State caused By Greed, Nepotism, Ineptitude and Insensitivity of Leadership: A cause for concern.

It is not news again that Bayelsa State is the most underdeveloped State amongst its contemporaries of Ebonyi, Ekiti, Gombe, Yobe and Zamfara that were created in the same date of October 1, 1996. It is also not news that the revenue earnings of Bayelsa State from the Federal allocation and the 13% is more than three times what their contemporaries get within a corresponding period.

Bayelsa State also own an oil company known as Bayelsa oil company Limited that have a functional and producing oil field, yet no revenue has been declared by the state government as revenue generated from the operations of the oil company. It is also worthy of note that the Bayelsa Development and Investment Company BDIC have asset base worth over N200bn spread across Nigeria, South Africa, UK and others, but over the years, no income has been declared by the State Government in the so-called transparency briefing that has never been transparent but deceitful. It is as good as a scam.

Despite all these sources of revenue, Yenagoa, the State capital still remains as a glorified village slum. This is in addition to lack of development in other fairly large communities and the rural areas that has been forgotten and the Local Government headquarters. All the streets in Yenagoa are deplorable to the extent that vehicle cannot pass through some of them. Uninterestingly, the source of water supply in the State is through water vendors using hand driven trucks. Surprisingly, this is the same source of water supply in the State water board of which the source of the water, the state of purity as to whether it is suitable for human consumption is not ascertained.

The most worrisome is the rising level of debt burden by successful administrations in the State without any form of corresponding appreciable development in the State. The question is, what are they doing with these loans alongside the statutory Federal allocations, bailouts, 13% derivations, and IGRs without any reasonable evidence of development? It is on record that the eight (8) years of Seriake Dickson led administration received revenue worth over N1.7trn while the seven months old present administration has received over N140bn.

The debt burden in the State as published by the debt management office (DMO) of Nigeria shows that the state indebtedness in both external and domestic has been on the increase with every successive administration so it is not surprising that the State has been declared insolvent. For the records, the publication of 2012, the State domestic debt burden was about N50bn when the restoration government of Seriake Dickson took over. It continued to increase and has never reduced, yet he was deceiving Bayelsans that he was paying debts owed by his predecessors. The figures below are self-explanatory in both external and domestic debts: –

External debts in US dollars (culled from DMO reports) as at: –

Domestic debt in Nigeria Naira (culled from DMO reports) as at: –

This implies that from 1st of January 2012 to 31st of December the State got an external debt of $32,064,672.74 (US dollars). In the same vein from January 2012 to 30th 0f June 2020, the State got a domestic debt of N100bn. The figures show that the last four and half months of the immediate past administration and the first four and half months of present administration, the State has collected a loan of N22.8bn. One major question the people of Bayelsa and friends and lovers of Bayelsa are asking is “WHAT IS THE ROLE OF THE BAYELSA STATE HOUSE OF ASSEMBLY IN ALL THESE LOANS?” This question is still begging for answers. There is a big conspiracy between the executive and the legislature against the development of the State. Borrowing a statement from one of my friends “KILL AND DIVIDE BAYELSA MONEY”

What is happening should not be a surprise to the people of the State, because the present administration promised to continue on the legacies of his immediate predecessor.

Will the people of Bayelsa State sit down and watch the state completely destroyed beyond redemption by our supposed leaders who in real sense are maximum dictators and oppressors and are never patriotic? Let us arise and put the State back in its right track of development because we have no other State of our own. This drew my attention back to my earlier writeup on episode 11 on the need for proper human capacity evaluation before contesting for an elective office and also the electorates to ensure that those elected have the knowledge base, exposure, experience and administrative humility, honesty and patriotism to the challenges of the offices they are seeking for.

These and more are the reasons Bayelsa is not developing since the emergence of democracy till date. Remember, you cannot develop beyond the qualities of your knowledge. Bayelsa and Bayelsans, when are we going to do things right? Let us arise and save the soul of Bayelsa State. Most intriguing and funny enough, these same so-called leaders have disoriented the minds of the people such that they don’t see them as their problems, instead, they see the Federal Government and the multinationals as their sole problem. (Note; the writer is not exonerating the Federal Government and the multinationals completely.)

My advice: Government at all levels should involve experts to actualise maximum development without increasing the debt burden successively to fall within the ambits of sustainable development, by so doing we shall not be harming the future.

To end this episode, I wish to leave you with some famous quotes:

A renowned 18th century philosopher and politician, Edmund Burke once said “The only thing necessary for the triumph of evil is for good people to do nothing”

According to Macklemore; “You can only watch injustice go on for so long until you’re compelled to say something. To speak out against it” The South African Nobel Laureate winner Bishop Desmond Tutu, aptly put it that “if you refuse to speak against injustice, you are on the side of the oppressor”.

Thanks, and May God help us.

*NB: This article written by Surv. Furoebi F.S. Akene; FNIS; FNES , a development consultant and former Bayelsa State Commissioner for Lands and Housing under the administration of former Gov Seriake Dickson was culled from the CENTRE FOR ENVIRONMENTAL PRESERVATION AND DEVELOPMENT (CEPAD).