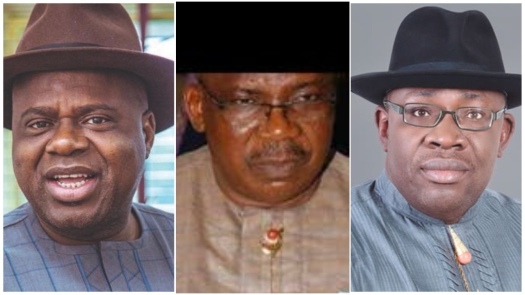 A Chieftain of the All Progressives Congress (APC) in Bayelsa State, Hon. Sunday Frank Oputu has described as “treacherous” the allegations of high debt profile against the past administration of Gov. Seriake Dickson by the former Commissioner of Lands, Surv. Furoebi Akene in a leaked viral telephone tape in the state.

The 15 minutes telephone conversation Leaked tape and between the former Commissioner of Lands, Furoebi Akene and the immediate past Governor, Hon. Seriake Dickson, which went viral on the social media bothers on allegation of high external debt burden by successive administrations in the state.

Hon. Sunday Frank-Oputu, while reacting yesterday to the development, described the allegation of the Former Commissioner as full of selfishly motivated and filled with inaccuracy.

According to Frank-Oputu, though every Bayelsa Indigene has the constitutional right to question activities of government and advocate good governance, the claims of the former Commissioner, who served under the same administration, is characterized with selfish motives and anger against those who purportedly stopped him from benefitting while serving as a public office holder.

He said the former commissioner was bitter that he did not execute contracts while in office which, according to him, is absurd.

“It’s quite unfortunate Akene has continued to display this character. The people of Bayelsa know him; he believes he’s smarter and more intelligent than others when he was made commissioner in the early days of Dickson’s government.

“He questioned the integrity of the Former Land Commissioner during the administration of Dickson.

“For the records, I must advise our people not to take the claims of the former Commissioner serious.

He also accused the embattled Former Commissioner, Furoebi Akene, of alleged intolerance against the former Surveyor-General of the Federation, Awudu.

On the high debt profile, Hon. Sunday Frank-Oputu faulted the former Commissioner over the claims that the administration of Governor Seriake Dickson was the most indebted in the State.